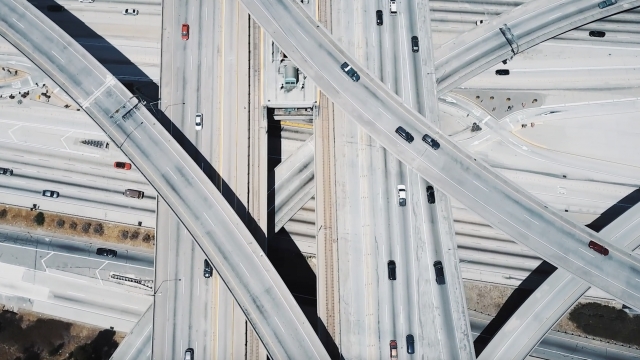 City streets have been unusually quiet these past few weeks. As America shelters in place, fewer cars on the road means fewer crashes, leaving emergency services in many places with more capacity to treat coronavirus patients. But that hasn’t been true across the board.

Some cities aren't seeing a change in the number of collisions, and in some places, it seems like the freedom of open roads has actually led to more dangerous crashes.

We analyzed car collision data across the country, and in most cities we looked at, both car crashes and injuries are way, way down.

Take Chicago, for example. According to city data, the number of people injured or killed in car crashes plummeted through March as the city and state adopted social distancing measures.

In the first two weeks of April, half as many people were injured or killed in crashes than in the weeks before the shutdown.

We also found that fewer injuries meant fewer EMS calls to crashes. They, too, fell by half — a much-needed relief for the local emergency care system. And when we crunched the numbers for other cities, we saw similar trends across the country. When the U.S. entered a state of emergency and cities and states started issuing shutdown orders, there were sharp declines in the number of crashes or crash-related injuries.

"Well, certainly, COVID has brought a whole new set of circumstances to those of us in the highway safety industry," said Michael Hanson, director of the Minnesota Office of Traffic Safety. "What really alarmed us in the two weeks following our stay at home order, ... we experienced twice as many fatalities in 2020 than we have in any year going back to about 2015. While our traffic volumes were down by 50%, our fatality crashes were up by 100%."

With so many states under stay-at-home orders, the national rate of emergency calls for car crashes went down — from 62 out of every 1,000 calls in February to 38 in April. But in some regions the rate of traffic calls over that period either went up or remained about the same.

That includes the region containing Minnesota. In these states, the rate of EMS calls to traffic incidents has held steady, despite a reported drop in traffic.

"A lot less congestion, and so there is just more freedom to step on that gas pedal and push that speed limit," Hanson said. "But what really alarmed us is how much they ticked up, and Minnesota was not the only state to see this. But we're now seeing, literally on a weekly basis, dozens of drivers who are being stopped and cited for traveling more than 100 miles an hour. And that's on our 55 mile an hour roadways, that's on some of our 45 mile an hour roadways as well as on our freeways."

Hanson also says that some people assume that law enforcement is too busy with COVID-19 to enforce traffic laws — leading them to reckless driving behavior.

There’s Memphis, which has one of the highest traffic fatality rates in the country. Their stay-at-home order went out on March 24, but the city hasn’t seen much of a drop in either collisions or injuries. That matters because, as Hanson points out, every ER visit takes up valuable resources.

"The last thing we need is somebody showing up in an emergency room, in a trauma ward or taking up an ICU bed because they've been involved in a serious injury crash that results in either critical injuries or even a fatality. If you look at the amount of resources that a single crash takes up, it’s tremendous," Hanson said.

Missouri is also seeing an unusually high number of fatalities given the reduction in accidents and traffic overall.

And in Chicago and Denver — cities where injuries from car crashes are dramatically down — the number of injuries per crash has actually gone up.

"It's almost been an accepted part of American life that motor vehicle crashes will happen and that people will die as a result of motor vehicle crashes," Hanson said. "We can support the COVID fight by not clogging up our ERs and our ICU beds with preventable trauma."