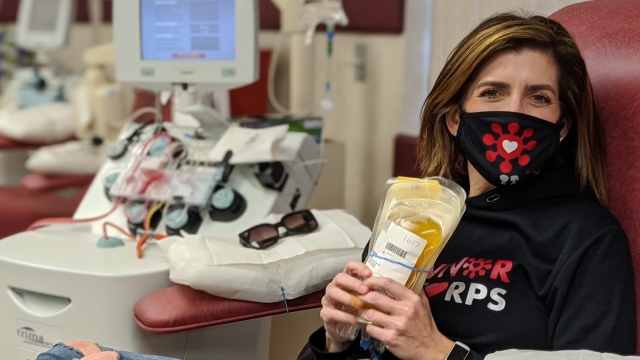 "There’s been no convincing anyone to do anything," said Diana Berrent. "It's truly an experience of if you build it they will come."

Berrent, of Port Washington, New York, tested positive for the coronavirus in mid-March.

"I was blown away by the response," she said. "I started this in my bedroom in isolation while I was sick. I had never started a Facebook group, I have no public health care background, I had no science background, but I saw a need."

Survivor Corps now has over 44,000 members, and growing. Many in the group are quite active; some share survival stories, others look to members for help.

"We’ve become the fastest-growing, most powerful grassroots movement in the COVID era," Berrent said. "We’ve issued a call to arms, a literal call to arms, because inside the arms of every COVID survivor are the antibodies that will lead us to a cure."

Berrent’s main mission is getting others to donate what’s called convalescent plasma, which is plasma taken from recovered COVID-19 patients.

Dr. Arturo Casadevall, a professor of molecular microbiology and immunology at Johns Hopkins Bloomberg School of Public Health, says convalescent plasma has been used to treat 7,200 people. He says anecdotal data suggests it may be working.

"The majority of people who have recovered have in their blood have something that has been associated with immunity." Dr. Casadevall said in a press conference on Thursday. "When we first began to contemplate [using donated convalescent plasma], we had no infrastructure for doing anything like this ... it is still hard to match donors with a place they can donate in some parts [of the country], but every day it's getting easier."

Newsy accompanied Berrent to the New York Blood Center, where she was set to give her fifth donation.

"The process is incredibly simple," Berrent explained. "If you’ve ever donated blood, it's about 100 times easier ... Once they separate it out they put the blood right back into you, so you don’t feel dizzy, there's no recovery and you’re ready to donate again seven days later."

"I think we’re going to have an indication that this is working very soon," Dr. Casadevall said Thursday.

"What do I mean by very soon? Within a couple weeks."