Millions Of Americans Struggling To Pay Rent During COVID-19 Outbreak 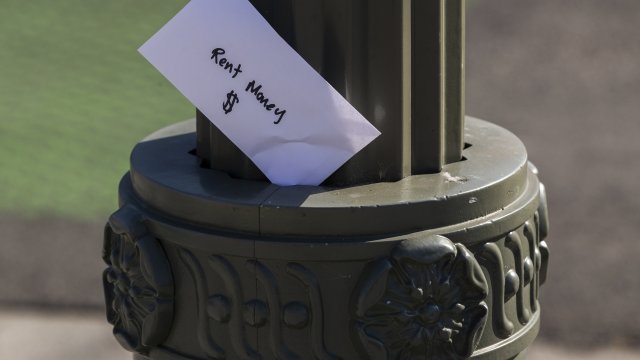 SMS
Millions Of Americans Struggling To Pay Rent During COVID-19 Outbreak
By Briana Koeneman
By Briana Koeneman
April 13, 2020
According to data released by the National Multifamily Housing Council, only 69% of apartment households had paid their rent by April 5.
SHOW TRANSCRIPT

Nearly a third of 13.4 million American renters are having issues making that monthly payment as the coronavirus pandemic continues to hit the U.S. economy.

According to data released by the National Multifamily Housing Council, only 69% of apartment households had paid their rent by April 5. Compare that to last month, when 81% had paid by March 5.

It's a staggering decrease. But experts say there could be a number of factors behind it. The CEO of Enterprise Community Partners told CNN the NMHC's data only represents a fraction of the 44 million renter households across the country and doesn't include subsidized housing.

She also pointed to some logistical issues renters might have faced in April that could've kept them from making payments on time, like office closures due to the coronavirus outbreak.

Millions of Americans have filed for unemployment as stay-at-home orders and other precautionary restrictions force many businesses to keep their doors shut and lay off employees.

Some states and cities have temporarily halted evictions, and a few landlords are offering discounts and payment plans to help financially strapped renters.