Poll: Majority More Likely To Support Voting By Mail Due To COVID-19 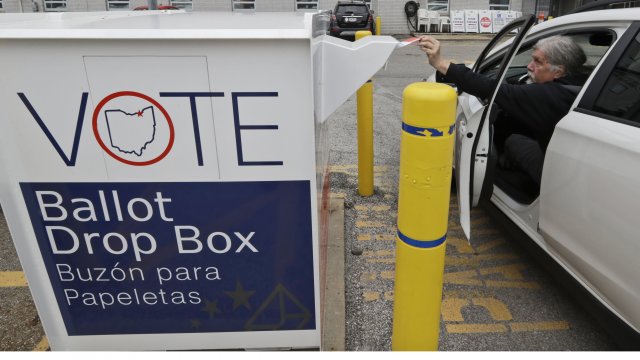 The pandemic is shaping Americans’ attitudes on voting and proposals to broaden the social safety net.

A majority of respondents in a Newsy/Ipsos survey said the coronavirus has made them more likely to support mail-in voting.

"A majority of Americans, nearly 4-to-1, say that they're more versus less likely to support," said Mallory Newall, research director at Ipsos. "And that includes half or more, so a majority of all ages, male and female Americans, every region of the country. So increased likelihood to support voting by mail is quite widespread."

But the findings also reveal a large partisan gap. Seventy-five percent of Democrats say they have grown more accepting of voting by mail. But that number drops to 36% for Republicans.

"What I think this boils down to is really messaging and what partisans are hearing about vote-by-mail and the cues and clues they are taking from their leadership," said Newall.

At a recent briefing with reporters, President Donald Trump said, "Mail ballots are very dangerous for this country because of cheaters."

Experts, however, say there is no evidence voting by mail increases the chances of fraud — or that it favors one party over the other.

"The president says to the contrary, if we did all this mail-in voting, Republicans would never win another election again. There's really not good evidence of that," said David Hawkings, editor-in-chief of The Fulcrum. "Similarly, if you aggregate, as another academic study did just last week, every report of voter fraud going back to the early 1980s, there's minimal, minimal cases of voter fraud in general, and voter fraud involving mail-in ballots even less."

The survey also showed Americans are warming up to two policies that helped drive the Democratic primary: "Medicare for all" and a universal basic income that would provide all Americans with a guaranteed wage.

Forty-six percent said they are more likely to support "Medicare for all", and 45% say they have grown more accepting of universal basic income.

Medicare for All was the cornerstone of Bernie Sanders’ campaign and a dividing line in the once crowded primary field. And universal basic income was Andrew Yang's signature campaign promise.

"I think people are really looking for ways to protect their health and their safety. And so it's interesting that we see broad support for 'big government' policies," Newall said. "But it's interesting, and I think it speaks to the uniqueness of the time we're in right now."