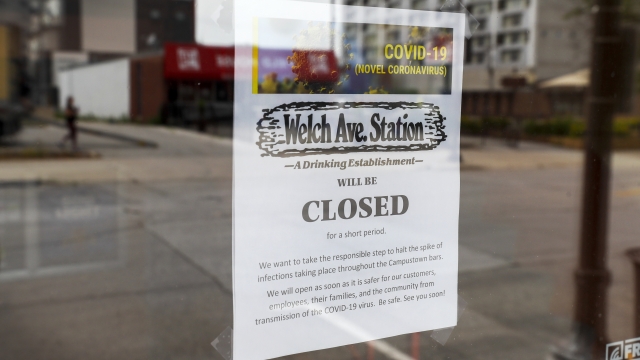 SMS
COVID-19 Is Shaking The Economies Of College Towns
By Amy Morona
By Amy Morona
July 27, 2020
Colleges are often woven into the identities — and the economies — of the towns they call home.
SHOW TRANSCRIPT

Colleges are often woven into the identity and the economy of the towns they call home. And in the age of a pandemic, that means these places and the reported 18.6 million people who live in them are at particularly high risk to suffer the brunt of the economic downturn.

“We have a couple businesses right across the street from the university catering directly to the university," Athens, Ohio, Mayor Steve Patterson said. "Things like the college bookstore. That business unto itself has already experienced about $500,000 in revenue loss, and the concern is what will happen in the fall.”

Athens is home to Ohio University. The town’s trying to recover from an unexpectedly tough spring and prepare for a fall that could be even worse, and many other college towns nationwide are in similar situations.

Plus, as is the case in Athens, colleges are often one of the largest employers in a region. The university has already reportedly laid off or eliminated more than 300 positions, according to The Athens News.

“If you don't have the university employees working, they're not going to have disposable income to spend on local businesses," said Andrew Koricich, associate professor and program director of higher education at Appalachian State University. "It really can be a domino that can knock over a number of other ones after it, just from this decision of, ‘What do we do next month.’”

As for this fall, colleges are juggling three plans: offering remote courses, bringing students back for some in-person courses or a hybrid of both. But some are already reversing their original decisions, leaving a cloud of uncertainty over campus communities.

In Columbia, Missouri, the plan for now is to bring students back to the University of Missouri in fall. Officials say they’ll implement contact tracing and social distancing, something that one local movie house is trying to incorporate to help it rebound from the difficult spring.

“We have all the equipment to do an outdoor screening," said Barbie Banks of the Ragtag Film Society. "We're going to start marketing that to fraternities and sororities because they have, you know, spaces and access to people that could pitch in."

And it’s not just a straight economic loss from local businesses or potential layoffs that these communities could face. With students populating college towns in a more limited, spaced out way, or even not at all, things will look and feel different.”

Athens' mayor says the city's already seen a downturn in student volunteers for community events, fewer interns working at local nonprofits and a loss in income from underused utilities.

It's also seen a decrease in 2020 Census respondents after the mass exodus of students in the spring, something that could have a lasting impact.

“You're looking at revenue that comes in for things like street, neighborhood improvements through the community development block grant, monies coming into Jobs and Family Services, the school system for K-12, as well as senior services programs," Patterson said. "To lose that much money to be drawn down from those programs is staggering.”