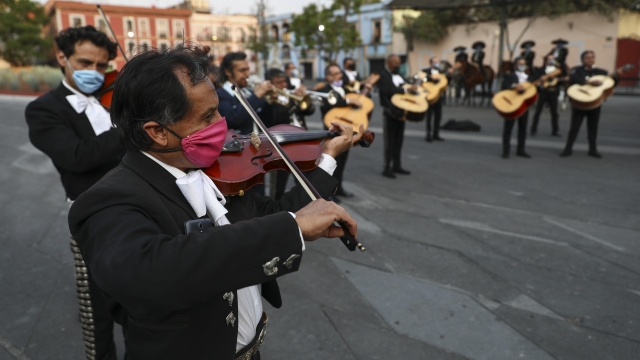 SMS
COVID-19 Cases Spike In Mexico Amid Fears Of Vast Undercount
By Peter Hecht
By Peter Hecht
May 15, 2020
Mexico's COVID-19 deaths are a fraction of the U.S. toll. But suspicions mount over whether the Mexican government is accurately tracking the spread.
SHOW TRANSCRIPT

Outside a Mexico City hospital, Isabel Cordero breaks down after learning that her husband has died of the coronavirus. She is one of few people outside the facility, patrolled by national guard troops, to learn anything about a loved one inside.

Mexico recorded its highest daily count of new COVID-19 infections Thursday, with more than 2,400 cases. By Friday, Johns Hopkins reported the country had nearly 43,000 total cases and 4,500 deaths, including 350 on Tuesday.

That's a fraction of the toll in the U.S. But suspicions mount over whether the Mexican government is accurately tracking the spread.

Last month, an inquiry ordered by Mexico City Mayor Claudia Sheinbaum Pardo showed that public hospitals in the city had three times more deaths than the federal government was reporting.

But the Mexican Society of Public Health says the country lacks "a well-implemented system" of testing. Its president, Dr. Miguel Betancourt, warns against reopening when people "don't really know precisely what the situation is."

Meanwhile, some Southern California hospitals report coronavirus spikes from U.S. citizens living in Mexico or people with dual citizenship who are allowed to cross the border. On the Mexican side, Mexican citizens returning at the Nogales crossing are getting sprayed in a sanitizing tunnel before being allowed back in.