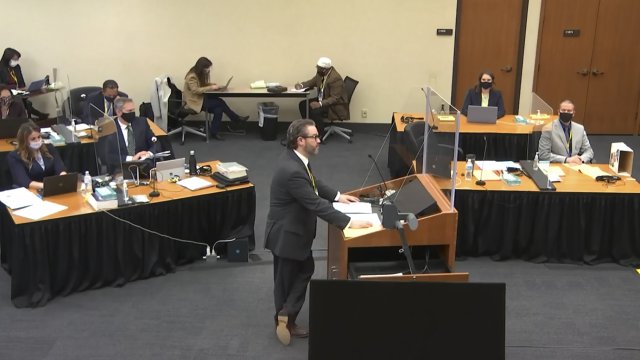 SMS
Court TV: 2 Jurors Dropped From Chauvin Murder Trial
By Newsy Staff
By Newsy Staff
March 17, 2021
There's only a week and a half left in jury selection in the case of George Floyd's death.
SHOW TRANSCRIPT

Jury selection continued to move forward Wednesday in Minneapolis despite multiple steps backward from inside that courtroom. This is something that was feared by the defense team for Derek Chauvin.

That news last week of the $27 million settlement between the city of Minneapolis and the family of George Floyd has prompted two previously selected jurors to renege on their ability to be fair and impartial.

This morning, the judge called back seven seated jurors via zoom call to ask if they'd learned about the civil settlement.

"How do you think that would affect your ability to be impartial in this case? Cool. I will impact that a lot. Last time I was asked about my strong opinions against Chauvin and clearly the City of Minneapolis has some strong opinions as well. And this just kind of confirms are my opinions that I already had."

That was juror number 36.

He's a Hispanic male who is a route driver who has been now excused from this jury, along with a white male sales manager, both of these men saying that they could no longer be fair and impartial because of that exposure to the news of the multimillion dollar settlement now with a week and a half left in jury selection in the case of George Floyd's death.