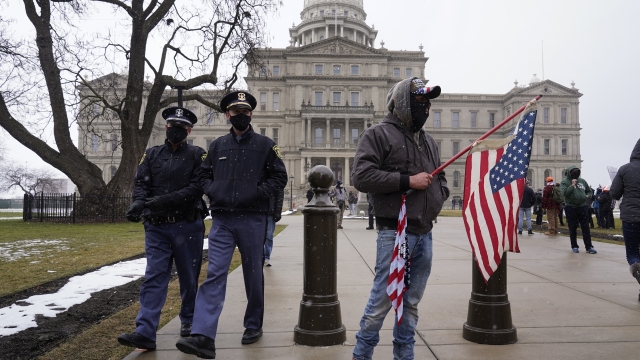 "I’m not here to cause any rift," a demonstrator said. Counterterrorism experts say an insurgency may just take a different form.

The country braced for an extremist movement over the weekend.

"We need to settle down. And coming from the area I’ve lived in Virginia, it’s a pretty Trump area. But I would say we just need to calm down and believe in each other," said Bertram Dodson, Virginia Resident.

Members of the far-right group Boogaloo showed up in Michigan, Ohio, and Utah -- and arrests were made for people carrying weapons and impersonating police in Washington, D.C. But across the country, protesters were largely outnumbered… by law enforcement and journalists.

“Do I want to have the National Guard on my streets? No, but do I want anything that is destructive? You know burning the city or whatever else? Absolutely not," said Mayor Andy Schor of Lansing, MI. "I would rather be over prepared than not and so far things have been peaceful and that’s great and we are looking forward to that throughout the day.”

Even in the nation’s capital, an eerie quiet.

Tall metal fencing and members of the National Guard as far as the eye can see… the unprecedented security, a lesson learned after rioters stormed the Capitol, sending lawmakers fleeing and causing five deaths. This crowd, at least some of them, wary to talk to journalists.

"To the extent that I would judge the president, or most of his supporters, by the activities of Jan 6 is the same as taking the worst of the left and saying that that’s representative of President-elect Biden. I think it’s unfair and not helpful," said one man in Washington, D.C.

This Trump supporter didn’t want to be named and says no one is changing their minds about the twice impeached president.

People are accusing the president of basically inciting the riot. Where do you stand on that?

"I think it’s a hard question and it depends on where you come from to begin with," he said.

"The country is in a very dangerous moment, almost parallel to the feeling we had in the country after 9/11," says Javed Ali, a former senior director for counterterrorism at the National Security Council.

They say an insurgency could continue after President-elect Joe Biden’s inauguration -- but it may not mean storming of government buildings:

"It's going to be a very sort of precarious time going forward because the Capitol event siege tactic may not be the tactic that we have to confront going down the road," Ali says.

An official tells Newsy National Guard members have been trained in handling improvised explosive devices, after pipe bombs were found outside Republican and Democratic headquarters. But protesters this weekend say the violence on January 6 doesn’t define them:

"I’m here for good. I’m not here to cause any rift or any trouble, nothing negative," said Steve Addyman, a Trump supporter from Minnesota.

"Joe Biden hasn’t even been inaugurated and our first amendment rights are already being taken away," said Becky Strohmeier, a Trump supporter and protest organizer there.

With investigations, arrests, and charges underway, the Department of Justice hopes to dissuade more extremists from acting out:

"I want to send a clear message to anyone contemplating violence, threats of violence, or other criminal conduct," said Acting Attorney General Jeffrey Rosen in a video statement. "We will have no tolerance whatsoever for any attempts to disrupt the peaceful transfer of power on January 20 that our constitution calls for."

But members of far-right groups are getting harder to monitor, as they move their online chatter to private messaging apps, where experts say they will become more radicalized.

“Well I’m retired military and we were told, whenever you see a lot of military in a city, it’s not good. So it saddens me to my core," said Suba Saty, a Virginia resident. "I never thought it would be like this ever, in D.C. and it breaks my heart.”