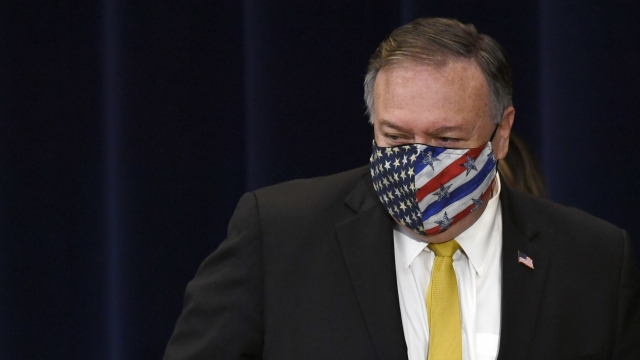 The U.K., France and Germany — all allies of the U.S. — are rejecting the Trump administration's demand to restore U.N. sanctions on Iran.

Secretary of State Mike Pompeo formally made that demand to the U.N. Security Council Thursday, citing Iranian violations of the 2015 nuclear deal.

"Our message is very, very simple. The United States will never allow the world's largest state sponsor of terrorism to freely buy and sell planes, tanks, missiles and other kinds of conventional weapons. These U.N. sanctions will continue the arms embargo," Pompeo said.

It's called a "snapback" procedure. Any country participating in the 2015 nuclear accord can move to restore sanctions if Tehran fails to comply with the deal. And under a binding U.N. resolution, Russia and China would not be able to veto the move.

But here's the key detail: President Donald Trump pulled the U.S. out of the deal in 2018. European signatories say that means the U.S. has given up its right to trigger the snapback.

Other world leaders have tried to salvage the Iran deal, saying there was no other mechanism to prevent Tehran from seeking a nuclear weapon.

Last week, the Security Council voted down an American attempt to renew an arms embargo against Iran. The U.S. effort comes as Iran state TV on Thursday displayed two new missiles said to have ranges from 400 to 600 miles... a public display certain to infuriate the Trump administration.