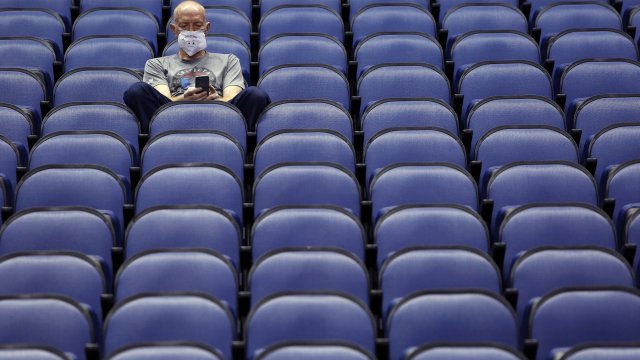 Right now, millions of people should be singing "Take Me Out to the Ballgame," gearing up for the playoffs or reliving the NCAA tournament. Instead, every single arena and stadium in North America is empty.

For many sports fans — the coronavirus went from an abstract threat to a reality the week of March 9.

That's when, sports all over the globe came to a grinding halt. Professional leagues in North America like the NBA and NHL paused their seasons. Major League Baseball pushed back Opening Day. But arguably the biggest headline came on the afternoon of March 12, when the NCAA canceled the men's and women's college basketball tournaments.

These announcements sent shockwaves through the sports world. And while the postponing and canceling of games and tournaments have a big impact for the players and fans, it has an even larger effect on the money tied up in all these sports.

The bigger sports leagues and teams have the money to survive this and know that once the pandemic is over, the games will resume. Forbes reports the NBA made $8.8 billion in revenue last season. All 30 teams in the league are worth at least $1.3 billion. Even the smallest of the "big four" leagues, the NHL, brought in more than $5 billion last season.

The same can't be said for less popular sports or organizations. In late March, USA Rugby said it will file for Chapter 11 bankruptcy as a result of "compounded and insurmountable financial constraints."

For one league, this pandemic couldn't have come at a worse time. The XFL, the spring football league birthed by wrestling promoter and businessman Vince McMahon. It was halfway through its inaugural season when it announced it was canceling all regular-season games. The following week, it canceled the entire 2020 season.

It's not known how much the league will lose from canceling its season halfway through, but when McMahon was putting the league together, ESPN reported he expected to spend around $500 million to get it going.

The next major professional sports milestone is the start of the NFL, slated to kickoff in early September. As of right now, the league says it plans to start on time.