How Smaller Plates And Cutlery Could Make You Feel Fuller 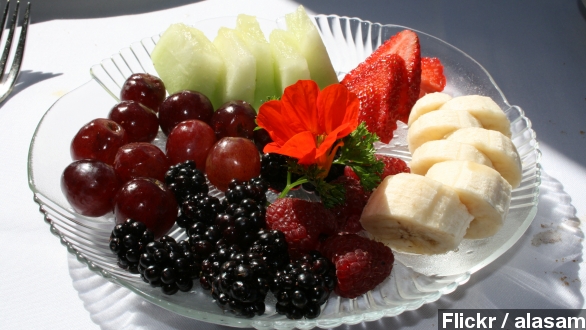 SMS
How Smaller Plates And Cutlery Could Make You Feel Fuller
By A.J. Feather
By A.J. Feather
April 22, 2014
NBC's "Today" conducted an experiment to see if changing the size of plates and utensils affects the amount individuals eat.
SHOW TRANSCRIPT

Summer is finally just around the corner, which means many of us will pay extra attention to what we eat to feel good in those swimsuits.

But there might be a better option than a traditional diet. The "Today" show points out there's an easier way to shave off a few of those extra pounds. (Via Wikimedia Commons / Petr Kratochvil)

"Stop obsessing about food. You can peel off the pounds just thinking about the plate you use, the utensils, and even just the order of what you eat. Eat less without even realizing it." (Via NBC)

It appears the "Today" show's experiment proved a point: The second group with the larger plates ate 56 percent more food, consuming 1,520 calories per person in pasta alone. The group with the smaller plate ate just 890 calories in pasta. People in the first group generally loaded up on more healthy stuff first, leaving less space on the plate for pasta. (Via Wikimedia Commons / Sherool)

Bryan Wansink, a Cornell marketing professor and the creator of MindlessEating.org, was featured on the segment. He says how much we eat has more to do with queues around us than how hungry we are or how tasty the food is.

"Six full ounces on an 8-inch plate, that looks like a really full portion. The same 6 ounces on a 12-inch plate is not even going to look like it's an appetizer." (Via TVO)

But a writer for Real Clear Science points out other studies have found plate size had little effect on how much we eat. A 2008 study from Penn State found individuals with smaller plates took more trips to the buffet, canceling out the benefits of using a smaller plate.

Regardless of the findings, the next time you head to the buffet it probably wouldn't hurt to pay attention to the size of your plate, not just what's on it.