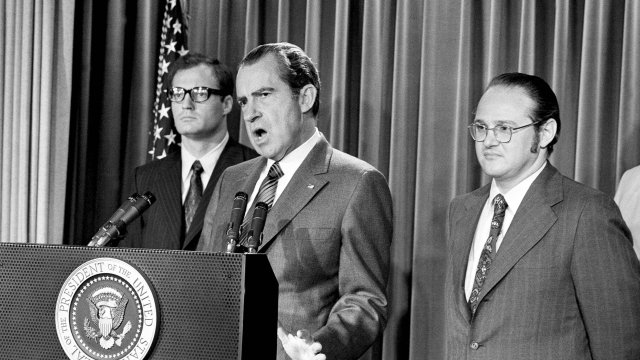 It’s been 50 years since President Richard Nixon declared a War on Drugs, increasing policing and punishments in an effort to curb drug use and save lives. But some say it’s done the opposite.

“Any legal, regulated anything is safer than anything illicit," said David Poses, author of The Weight of Air: A Story of the Lies about Addiction and the Truth about Recovery.

In his new book, Poses details his 16-year-long heroin addiction. Since he became sober, he’s been advocating for legalization, which he says would be much more effective in lowering the sky-high overdose rate.

“We think alcohol is legal because it's safer. Alcohol is actually safer because it's legal. It can kill you in more ways than all other drugs combined," Poses said.

Poses joins some addiction experts who say legalization — and therefore, regulation — is our best bet against overdoses and addiction. And they often point to alcohol to support that thesis.

“We had tens of thousands of Americans who were maimed or killed from drinking tainted alcohol or poisonous alcohol. When we overturned prohibition, those numbers dramatically decreased," said Carl Hart, chair of the Department of Psychology at Columbia University.

Proponents say it could work just like legal cannabis, in their own shops with established rules like age or residency requirements. And, these shops could offer testing to eliminate drugs laced with deadly ingredients, like fentanyl, and to determine potency.

But the push to legalization has plenty of critics. Some of them say there’s already enough evidence to prove it would be more harmful than helpful.

“The legal company was called Purdue Pharma. The legal opioid was called OxyContin. And in the space of 10 years, it ruined more lives than the illegal drug heroin had in the past century. So we've been there and we've done that," said Keith Humphreys, professor of psychiatry at Stanford University.

It’s unclear how much support there’d be on Capitol Hill for legalization. But during the 2020 election, Oregon became the first state to decriminalize small amounts of drugs, including heroin and cocaine. And eighteen states have already legalized marijuana, reflecting a shift in attitude on drug use — including drinking.

“We just accept that alcohol is perfectly fine and drugs aren't. And that's just not the case," Poses said.

Experts may disagree on legalization, but most of them acknowledge a change in approach is necessary — in particular, when it comes to law enforcement.

“It's a bad idea, in my opinion, to take somebody who's been caught in possession of, say, fentanyl or heroin for their own use and throw them into a jail cell. When you do that, you are putting their life at significant risk. You are not deterring use by anyone else. You are wasting a lot of resources," Humphreys said.