Could Drones Secure The Border Better Than Trump's Wall? 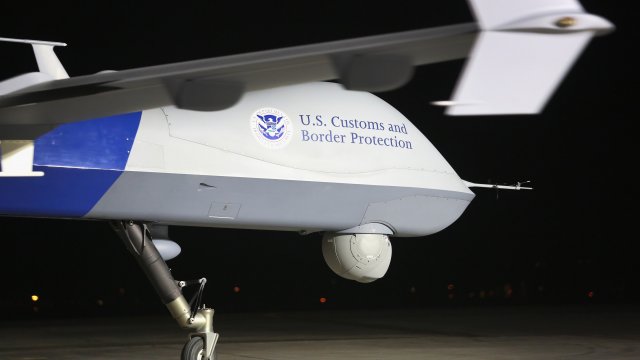 SMS
Could Drones Secure The Border Better Than Trump's Wall?
By Ben Schamisso
By Ben Schamisso
January 10, 2019
The CEO of an augmented reality company says drones would be more efficient at securing the border than the president's proposed wall.
SHOW TRANSCRIPT

If the government shutdown has achieved one thing, it's been focusing the nation's attention on whether or not we need President Trump's wall to secure the border.

But beyond that debate, little has been said about how new technology could also play a major role in boosting border security.

In fact, the CEO of an augmented reality company told us at CES why he believes drones would be more efficient — and cheaper — at securing the border than the president's proposed wall.

"You can have a wall, but you can't build it high enough to solve all the problems," said Edgybees CEO Adam Kaplan.

"We're not coming here and preaching that walls are bad. We just believe that using our technology can help secure the borders in a better way," Kaplan added.

Adam Kaplan's technology turns a drone's video feed into an augmented reality experience, thanks to real-time analysis of geospatial data.

The software has helped first responders' rescue efforts during fires and hurricanes.

Kaplan believes that for a much cheaper price tag than President Trump's wall, the U.S. Border Patrol could hire thousands of new agents and still buy tech like his to detect threats along the border in real time.

"Sensors, drones, augmented reality, artificial intelligence — all of this is more of a holistic approach, where I think that taking multiple types of data and video and technologies is where the answer is."

That answer is not far-fetched. The U.S. government has been flying drones along the country's borders for almost 50 years. And border agents flew more drone missions in 2017 than ever before.

Trump: "Having drones and various other forms of sensors, they're all fine, but they're not going to stop the problems that this country has."

And he's not the only one. The libertarian think-tank the Cato Institute says the current drone program at the border is inefficient and raises serious privacy concerns.

Kaplan admits in a Quartz piece he co-wrote that his technological solutions are imperfect. Still, when it comes to border security, the CEO believes we shouldn't "turn a blind eye to the advantages afforded by potentially game-changing technologies."