Could Deflategate Go To SCOTUS? Yes, But God, We Hope It Doesn't 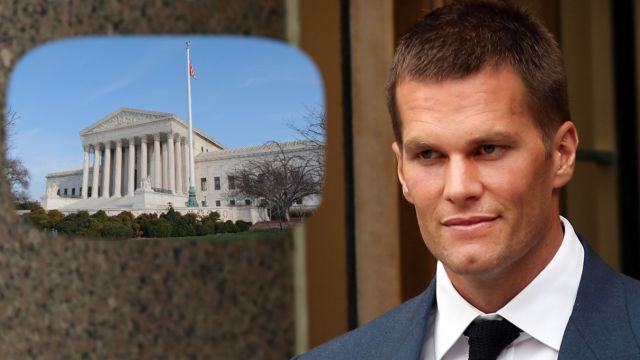 A panel of the 2nd U.S. Circuit Court of Appeals upheld the NFL's suspension against Tom Brady, but if the NFLPA wants to, it can appeal to SCOTUS.

So, could Deflategate (Brady v. NFL) go to the Supreme Court? Well, the short answer is yes, but it's highly — highly — unlikely.

In a 2-1 decision, a panel of the 2nd U.S. Circuit Court of Appeals upheld the NFL's four-game suspension against Tom Brady.

That's after a federal district judge overturned the NFL's suspension last summer, keeping Brady on the field for the entire 2015 season.

Now, Brady and the NFLPA are left with two options if they want to continue fighting the (questionably) good fight. One, ask for a re-hearing before the full 2nd Circuit ...

...or two, the more ludicrous option, appeal to the Supreme Court.

The Supreme Court receives thousands of petitions, which is why it gets to decide the cases it does and does not hear. Also four of the eight justices have to vote to take on the case.

And while we hope the highest court in the land has more important things to rule on, five of the eight Supreme Court justices are Harvard Law grads and seeing that HLS is just miles away from Beantown, maybe they can't be trusted with this decision.

As for Brady's next move, no one knows, but the NFLPA did release this statement, saying, "Our union will carefully review the decision, consider all of our options and continue to fight for players' rights and for the integrity of the game."

Let's just hope by "all options," they mean the ones that don't involve the United States Supreme Court.