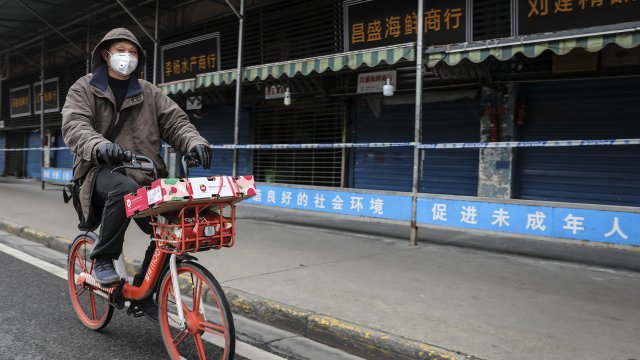 SMS
Coronavirus Outbreak Casts More Doubt On U.S.-China Trade Deal
By Matt Picht
By Matt Picht
February 7, 2020
A deadly viral outbreak could make it even harder for China to meet its obligations in the U.S.-China "phase one" trade deal.
SHOW TRANSCRIPT

The coronavirus outbreak in China is posing a threat to a key provision of the U.S.-China trade deal; the country's ambitious pledge to buy large amounts of U.S. goods over the next two years.

The virus has caused hundreds of deaths and infected thousands of people. Authorities have responded with widespread lockdowns to contain the virus — which means workers and companies can't do business as usual.

Stephanie Segal, a senior fellow at the Center for Strategic and International Studies, told Newsy, "There's really not a sector of the economy that's going to be undisturbed by the outbreak. And then we can talk about, that's kind of in the domestic economy, but then that domestic economy and manufacturing in particular is fueled by imported goods and so then you start to see these spillovers to countries that export to China also feeling the impacts."

The phase one trade agreement contains a list of U.S. goods that China has pledged to buy $200 billion more of during the next two years.

The country claimed it'd be able to meet those pledges thanks to the demands of its growing market. But that was a tall order — even before the virus hit. China would have to nearly double purchases of the targeted U.S. goods to meet its goal.

China's most recent battle with a coronavirus was in 2003, when the SARS epidemic infected over 8,000 people worldwide, killing 774. The country was able to shrug off the economic hit of that virus: but this latest outbreak could have a more devastating effect.

Anna Ashton, the Senior Director of Government Affairs at the U.S.-China Business Council, told Newsy, "China was in a very different place as an economic actor in the world. Now they're the second largest economy and growing more rapidly than any other economy in the world. global supply chains everywhere are dependent on China and go through China in some way, shape or form. So the potential for a significant economic impact is very, very real. And I think, kind of immeasurable."

China hasn't publicly sought to get out from under its purchase commitments yet: in fact, the country recently slashed its tariffs covering $75 billion worth of U.S. imports, making it easier for Chinese firms to buy those U.S. products.

But it's worth noting the U.S.-China trade deal does contain a possible out — its last clause says both sides can meet for consultations if an "unforeseen event outside the control of the Parties delays a party from timely complying with its obligations under this Agreement."

Ashton said, "It might make sense for the US government for the Trump administration to consider taking some steps proactively to provide relief from us tariffs, at least temporarily, in order to make the deal more feasible."