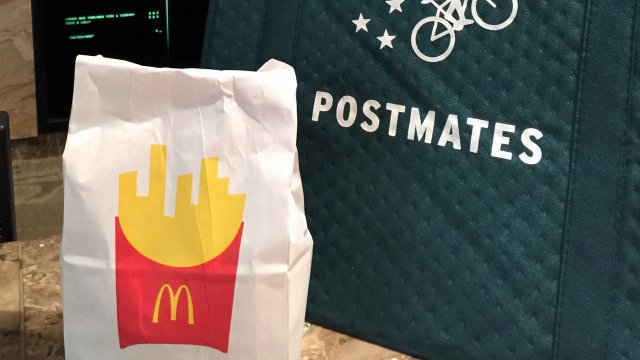 SMS
Coronavirus Could Boost 'Sharing Economy' Services In The Long Term
By Bianca Facchinei
By Bianca Facchinei
April 3, 2020
Experts say a rise in quarantining and unemployment could lead to long-term growth for companies in the sector.
SHOW TRANSCRIPT

For the first time ever, gig workers will receive unemployment benefits that are typically reserved for full-time employees from the coronavirus stimulus package.

It marks a milestone for the sharing economy and millennials, who make up the largest living generation, known for preferring “access” and “experiences” to ownership — fueling the rise of companies like Uber. But does social distancing fit into that trend? One expert says it may not have such a negative impact.

“This kind of crisis can catalyze or even accelerate an ongoing change,” said Arun Sundararajan, author of "The Sharing Economy: The End of Employment and the Rise of Crowd-Based Capitalism".

A new Ipsos poll for Newsy found that over half of consumers who engage in the sharing economy are using services less frequently now. But the survey also found that only 27% say they're less likely to use them even after the coronavirus is contained.

The challenge lies within the intention — sharing instead of buying — at a time when face-to-face interaction is discouraged. But some sharing economy companies could gain new customers because of that.

“There’s a potential set of people who may not have actually taken the leap to ordering their food from a restaurant through a platform or ordering a meal kit, and they are doing that now because of the quarantine. And so this may change their behaviors even post-quarantine as they’ve gotten used to a new way of getting their food delivered,” Sundararajan said.

“In an environment where you have 20% unemployment, if the only way that you can earn income is to find gig employment, I do think you would see people move in that direction,” said Alastair Fitzpayne, director of the Future of Work Initiative at the Aspen Institute.

As big sectors like travel and retail bleed jobs, unemployed Americans could look to gigs, like driving for Lyft or delivering for Postmates, for extra income. But Fitzpayne sees a bigger challenge that still needs to be addressed.

“The crisis highlights the workers and the disconnection that they have to traditional benefits that provide some degree of security and stability,” Fitzpayne said.