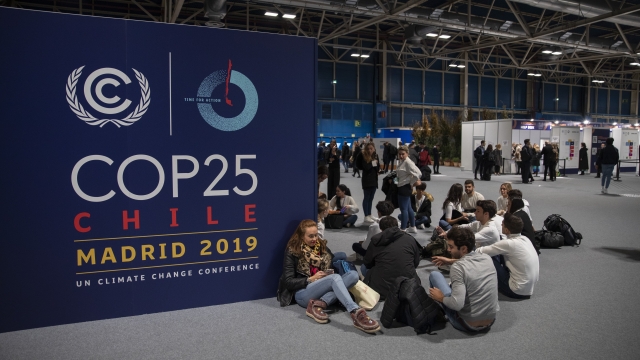 SMS
Climate Summit Kicks Off With Dire Warnings From Top U.N. Officials
By Terace Garnier
By Terace Garnier
December 2, 2019
The U.N. secretary-general asked, "Do we really want to be remembered as the generation ... that fiddled while the planet burned?"
SHOW TRANSCRIPT

Top U.N. officials are urging world leaders not to give up on climate change, issuing a dire warning:

"Do we really want to be remembered as the generation that buried its head in the sand? That fiddled while the planet burned?"

The U.N.'s secretary-general made those comments as more than 25,000 people from 200 countries met in Spain to discuss climate change.

Over the next two weeks, the U.N.'s COP25 climate change conference will host well known activists such as Greta Thunberg, scientists and dozens of heads of state and government.

In November, U.S. Secretary of State Mike Pompeo announced his country would begin formally withdrawing from the Paris climate agreement.

"We're getting out," President Trump said.

In the past, President Donald Trump said unfair economic burdens imposed on American workers tipped the decision. The earliest day the U.S. can actually withdraw from the Paris accord is November 2020, one day after the presidential election.

"By coming here we want to say to everyone we are still in. The United States is still in."

Brazil was originally set to host the summit, but its newly elected president, who has criticized environmental protection laws, backed out last year.