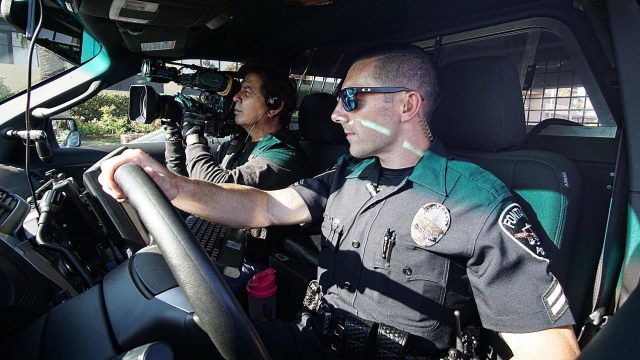 Crime shows are arguably the most popular genre of television — but following calls for racial justice, they're facing major scrutiny for their portrayals of law enforcement.

The reality show "Cops," which had been on air since 1989, was canceled amid the conversations and criticisms of police brutality. A&E canceled "Live P.D." shortly after.

Professor Andrew Rojecki: "I think that the formula for the show was problematic, because it took the point of view of the police themselves."

Though "Cops" was just canceled, many experts have been voicing concerns about the one-sidedness of crime entertainment for years.

A 2011 report from The Opportunity Agenda found a causal link between media and public attitudes about criminality and violence, as well as sympathy for Black communities. And a 2020 report from the Norman Lear Center and Color of Change found that crime shows lean on a good vs. bad dichotomy, with police more likely to be portrayed as "good" — even when they committed wrongful actions such as racial profiling.

Rojecki: "So, you have the sense of the sort of efficient arm of law enforcement protecting the interests of people threatened by minorities — nameless, sort of the generic others."

Alyssa Smith: "It is bolstering the cultural power of law enforcement without allowing the space for people who are being criminalized or victimized by the criminal justice system to provide any testimony or contribute to that body of knowledge."

As protests for racial justice continue, public opinion of law enforcement is noticeably changing. A Monmouth University poll from this month found that a majority of Americans surveyed now believe police are more likely to use excessive force against someone who is Black.

Smith: "It's no longer as easy to watch a police officer describe an incident on a television show without thinking about how the officer accounts of George Floyd or Breonna Taylor's murders, or even the accounts that are coming out of protests, can be directly contradicted by visual evidence."

Going forward, advocates for racial justice say the entertainment industry needs to hold itself accountable and continue scrutinizing its portrayals of the criminal justice system. Rashad Robinson, President of Color of Change, wrote in the organization's 2020 report: "We need a new level of standards and a new sense of responsibility that correspond to the level of influence these shows have."

In a column for The Hollywood Reporter, writer and Harvard Law Professor Alan Jenkins called for a "Bigotry Pass" or review on scripts to flag "harmful stereotypes, narratives and tropes."