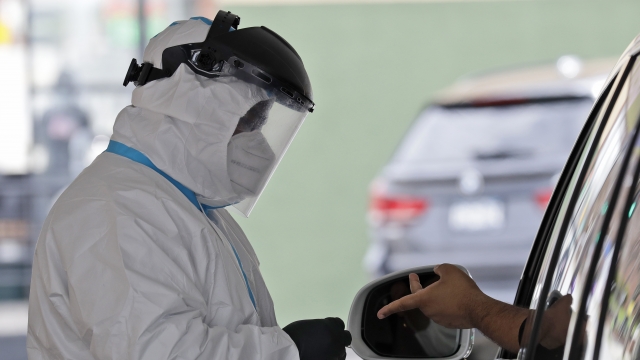 Despite being debunked by scientists, two conspiracy theories regarding the virus and the technology are still being widely circulated.

"Once a falsehood makes it out into the mainstream, even if you delete the post, the damage has been done," Darragh Worland, Vice President of Creative Services with the News Literacy Project said.

5G is the next generation of wireless technology that countries around the world are competing to develop and introduce to the public. The timing of this technology push in the last year and the outbreak of the coronavirus in recent months has prompted falsehoods claiming a connection between the virus and the technology.

"Conspiracy theories love nothing more than a coincidence," Worland said.

Despite being debunked by scientists, two conspiracy theories regarding the virus and the technology are still being widely circulated. One is the false claim that 5G radio waves cause COVID-19 and or suppress the immune system. The other is the falsehood that the outbreak is a hoax government and media companies are using to get people to stay home so 5G networks can be installed.

According to Darragh Worland with the News Literacy Project, a nonprofit that seeks to develop smart news consuming habits and stop the spread of misinformation, these untrue theories have been gaining traction online.

"What we're seeing is celebrities are now hawking this theory," Worland said. "They have an outsized influence on you know, the spreading of this misinformation people are much more likely to share it because they're seeing that, you know, familiar faces are adding credence to these really outlandish ideas."

Celebrities who have reportedly posted about such conspiracies include singer M.I.A. and actor Woody Harrelson.

"You know, if you are a public figure and you could just be an influencer on social media who has a tremendous following, you've really got to make sure you check your facts before you share anything," Worland said.

A study conducted by the Reuters Institute for the Study of Journalism at the University of Oxford recently analyzed 225 pieces of COVID-19 misinformation posted between January and the end of March. According to the study, while only 20% of the false posts came from public figures like celebrities and politicians, that content accounted for 69% of total social media engagement.

"Part of the problem with social media is that it doesn't necessarily reward truth or facts. It rewards likes and shares or engagement," Worland said.

Worland says conspiracy theories and misinformation won't go away anytime soon. But she does believe there is a way to reduce the spread by encouraging people to think critically about the information they see and hear before sharing it with others. That means slowing down.

"I think that the solution is news literacy, being able to recognize the story and to be able to stop yourself before you let your brain sort of go down these paths that are going to really lead you nowhere helpful," Worland said.