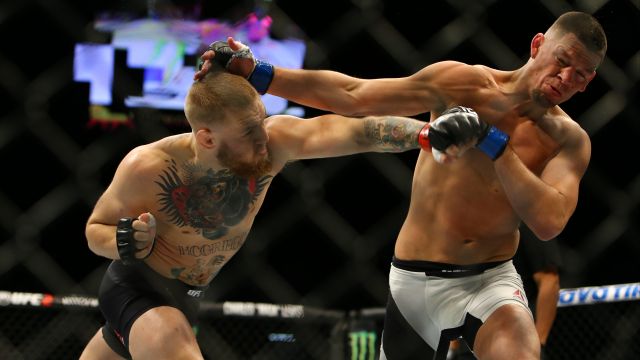 The UFC world is in shock after both Conor McGregor and Holly Holm were upset on Saturday.

A bloodied Nate Diaz defeated Conor McGregor in the second round of the main event thanks to the rear-naked choke. Diaz had accepted the fight just 11 days prior.

Holly Holm also fell to underdog Miesha Tate on Saturday night, despite Holm winning the majority of the fight. A fifth round, rear-naked choke earned Tate the title of the new bantamweight champion.

Both of the losses dramatically shake things up in the UFC.

Holm's loss means her much-anticipated rematch against Ronda Rousey, whom Holm stunned back at UFC 193, won't have as much on the line.

As for McGregor, the Irishman is still the UFC featherweight champion, but this loss snaps his 15-fight win streak. McGregor went up to 170 pounds for this fight against Diaz.

McGregor says he's interested in returning to the octagon at UFC 200 in July to defend his featherweight title.