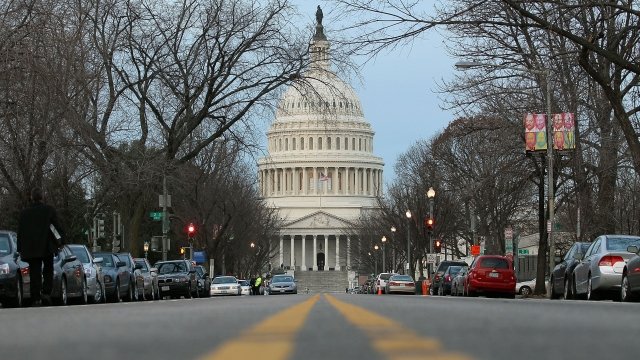 The Trump administration urged Congress on Wednesday to "fix loopholes" in immigration laws. The request comes after a U.S. Supreme Court ruling made it harder for authorities to deport noncitizens who've been convicted of certain crimes.

"Congress should immediately pass a fix to close those loopholes so that the United States can promptly remove violent criminal aliens from our country," White House press secretary Sarah Sanders said in a statement.

On Tuesday, the Supreme Court said a statute in the Immigration and Nationality Act that allowed immigrants convicted of "crimes of violence" to be deported was unconstitutionally vague.

The case centered around James Dimaya, a lawful permanent resident of the U.S. But when he was convicted of two burglaries, the Obama administration tried to remove him from the country using the "crimes of violence" clause.

According to the statute, a "crime of violence" is any felony that "by its nature, involves a substantial risk [of] physical force against the person or property."

As Newsy previously reported, Justice Neil Gorsuch was the swing vote, and he argued the way the law is written allows "prosecutors and courts to make it up."

The ruling could have a big impact on legal immigrants who have committed crimes. The Supreme Court decision effectively limits the types of crimes that can prompt deportation, potentially protecting some immigrants with low-level offenses from being kicked out of the country.