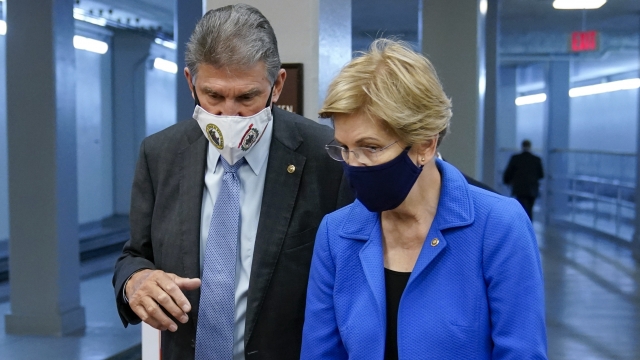 SMS
Congress Debates The 'Billionaire Tax'
By Nathaniel Reed
By Nathaniel Reed
October 27, 2021
The proposal — backed by Senators like Elizabeth Warren — would impose a 15% minimum tax on the most profitable American corporations.

The latest debate in Congress swirls around two questions: First, should the richest Americans have to pay taxes on assets they hold? And second, should the most successful companies have to pay a corporate minimum tax?

"The tax system is rigged, and letting these giant profitable companies get away with paying nothing has to come to an end," Sen. Elizabeth Warren said.

The proposal — backed by Senators like Elizabeth Warren — would impose a 15 percent minimum tax on the most profitable American corporations. That 15 percent minimum tax would be across-the-board on declared income. It would only apply to companies reporting more than a billion dollars in profits each year for three years.

And certain tax credits — for things like clean energy and research and development — would remain intact.

"It hit about 200 of the biggest companies and most profitable companies in the country. And it will raise a few hundred billion dollars that we can spend on child care and fighting the climate crisis," Sen. Warren said.

The poster child for this corporate tax is Amazon. It reported $45 billion in profits over the past three years but paid just over four percent in taxes, far below the current 21 percent corporate tax rate.

These proposed new rules for the most profitable corporations differ a bit from the idea proposed earlier this year by President Joe Biden. His threshold for impacted businesses was $2 billion in profits, not $1 billion.

"In America, by the way, we used to encourage everyone to work hard, play hard, and if you play hard, work hard, you have a chance to be anything you want to be," Rep. Steve Scalise said. "Except now, big government socialists want to cap how successful you can be."

Then there's a more controversial proposal — the so-called "billionaire tax." This would tax the richest Americans on the assets they hold. People like Jeff Bezos, Elon Musk and Mark Zuckerberg. It would apply to about 700 people.

A Forbes analysis of the 20 richest American billionaires found they would have paid $239 billion in taxes last year alone, if this law were imposed.

Here's how this proposal would work: The plan, championed by lawmakers like Sen. Ron Wyden, would only impact people who have more than a billion dollars in assets or who make 100 million dollars in income for three straight years.

These people would have to pay a tax on "unrealized gains" in publicly traded assets.

Sen. Joe Manchin, a key Democratic swing vote, said he does not support the idea because he doesn't want to target certain people.

Still, he says he agrees that some billionaires should pay more.

"We've said and we've all agreed on a 15 percent corporate tax," Manchin said. "Well, people in the stratosphere, rather than trying to penalize them, we ought to be pleased that this country's able to produce the wealth. But with that, there's a patriotic duty that you should be paying something to this great country to give you the protection and support and the opportunities. That's called a patriot."