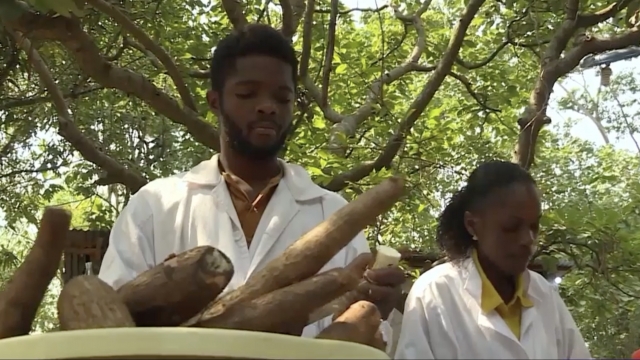 A new baker's confectionery in the Democratic Republic of Congo is making bread and pastries from ground cassava as an alternative to wheat flour. Cassava is a starchy root tuber that's widely grown in Africa and South America.

One workshop at the University of Kinshasa is churning them out across this city of bread lovers. And some people have taken a liking to them.

"If you were blindfolded and made to eat bread made from cassava flour, you won't be able to tell the difference between it and the one made from wheat flour," University of Kinshasa anthropology student Bertin Tshama said.

"Everyone is concerned about the shortage of wheat flour and the rising prices in our markets," she said. "I decided to start using cassava flour to bake bread and cakes because we have plenty of cassava here."

According to the Food and Agriculture Organization, the DRC is the world's third-largest producer of cassava after Nigeria and Thailand.

The crop is a reliable source of food during drought.

The global shortage of wheat flour and rising prices have made some bakers in the DRC substitute wheat with cassava flour that has the potential of increasing the incomes of small-scale farmers who largely grow the crop for home consumption.

The Congolese government is promoting the use of cassava flour to reduce the cost of wheat imports estimated at $87 million a year. That has been hailed by many farmers, like Joseph Ungu.

"We should utilize this ground that God gave us for growing cassava," he said. "It will nurture us and our future generations fully."

Professor Yandju is now training her students to seize the business opportunity.

"We have decided to focus on doing research on cassava in order to improve the livelihood of our citizens and people in other countries like Ukraine," University of Kinshasa biology student Nahomie Nyange said.

The DRC is among the African countries that rely on Russian and Ukrainian wheat to meet their consumption needs.

Other African countries are also encouraging their farmers to grow more cassava to reduce their dependence on wheat.

The shortage of wheat stirred Professor Yandju to offer Congolese citizens a new taste of cassava that she hopes will encourage other people to find homegrown solutions to global challenges.