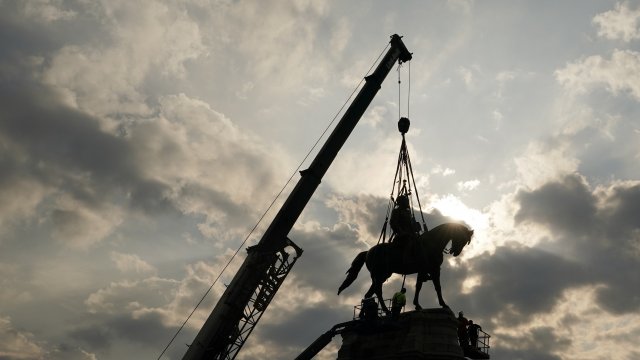 In recent years, some states have recognized April as Confederate Heritage Month – a time designated to remember the history of the Confederate States of America.

The Confederacy was born in 1861 when a group of Southern states seceded from the Union after battles over slavery. The Confederacy effectively lost the Civil War in April 1865, when Confederate General Robert E. Lee surrendered to Union forces at Appomattox Court House, Virginia.

Many of these were taken down after the 2017 “Unite the Right” rally in Charlottesville, Virginia. More than half of them were removed after the murder of George Floyd. The SPLC report also notes that as of today, more than 2,000 Confederate memorials are still standing in the U.S.

"Because we track and monitor far right hate and extremist groups, we know that symbols of the Confederacy often show up at events that are hosted by known hate groups," said Lecia Brooks,  chief of staff and culture for the Southern Poverty Law Center. "So, jump from 2015's massacre in Charleston to the 2017 Unite the Right rally in Charlottesville, and we saw the symbols of the Confederacy there, right alongside neo-Nazis, alongside Klan members."

The SPLC also found an interesting correlation a few years back: These memorials didn’t just pop-up at random. They saw a spike in the early 1900s as Southern states started enacting Jim Crow Laws. There was a second spike in the 1950s and '60s during the Civil Rights Movement.

“We know that the creation of these memorials were erected to assert and reassert White supremacy," Brooks said.

Valerie Johnson, who’s a member of the North Carolina Historical Commission, was involved in discussions about taking down monuments at the state capitol building. But before any decisions could be made, local residents decided to take the monuments down themselves.

Confederate memorials include things like monuments, school and street names, flags and more. And while many people have been pushing for their removal, at the same time, some places are working to bring Confederate heritage back to the forefront.

According to the Mississippi Free Press, Gov. Tate Reeves declared April Confederate Heritage Month for the third year in a row.

Reeves stated: “It is important for all Americans to reflect upon our nation’s past to gain insight from our mistakes and successes.”

These proclamations have been signed before by past governors, but they come at an interesting time as the state removed the Confederate emblem from its flag in 2020.

But Mississippi isn’t the only state recognizing the Confederacy in some symbolic way. Other Southern states, like Alabama, Georgia, Louisiana, Florida, Texas and Virginia, have also recognized the Confederate States through a monthlong declaration, and some of those same states have declared Confederate Memorials Days in either April or May.

Many places that memorialize the Confederacy have also passed legislation to prevent the removal of Confederate memorials.

“We saw in Southern states, six Southern states in particular, Alabama included, created preservation laws when it became obvious to them that there was some traction in this movement to remove Confederate monuments," Brooks said.

As efforts to remove these monuments continue, some see this as an opportunity to change how the nation addresses parts of American history — no matter how painful.

"It's an opportunity to do something completely creative, interesting, historical, contemporary and there," Johnson said. "The opportunity for us to engage in a dialogue about who we are, who we want to be and to do some of that reconciliation work, that needs to happen. That's what I see going in those so-called empty spaces.”

"It gives us an opportunity to talk about true history and to reconcile or reckon with our past and move forward towards an inclusive democracy that is open and celebrates all people," Brooks said.