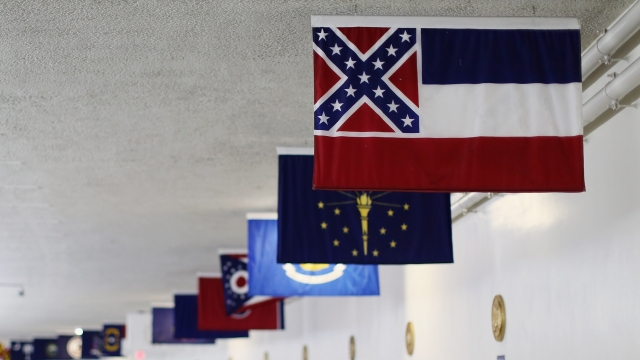 A dispute over displaying Confederate iconography on Capitol Hill has changed a row of state flags into a display of state quarters.

A tunnel connecting the Senate office building to the Capitol used to be lined with a display of flags from all 50 states — including Mississippi's flag, which features a Confederate battle emblem.

The flags were taken down during the tunnel's renovation, and Committee on House Administration head Candice Miller says they won't be going up again. Taking their place will be reproductions of the commemorative state quarters produced by the U.S. Mint.

Rep. Bennie Thompson of Mississippi introduced a resolution to remove his state's flag from the tunnel in the wake of the racially motivated mass shooting in South Carolina last year.

But the Mississippi flag hasn't been banished from the capitol altogether: Miller's statement notes members are still free to display the flags of their home states outside their personal offices.

This video includes images from Getty Images and Ken Lund / CC BY SA 2.0.