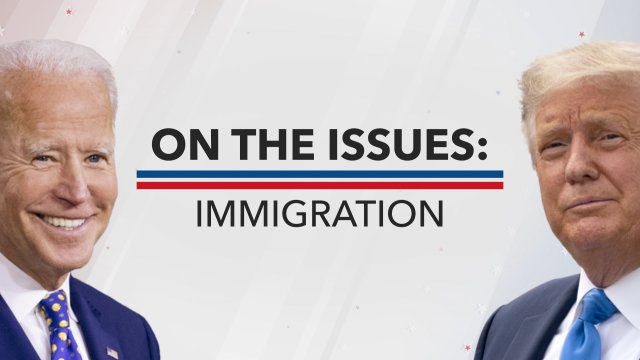 SMS
Pres. Trump And Biden Have Radically Different Immigration Platforms
By Ben Schamisso
By Ben Schamisso
September 28, 2020
The president has made curbing immigration a key part of his agenda. Biden has promised to quickly roll back most of the Trump administration actions.
SHOW TRANSCRIPT

President Trump has made reducing immigration a key part of his administration's agenda.

Now, Joe Biden, his Democratic challenger, has promised to quickly roll back most of the president's executive actions and advance his own ambitious immigration platform.

"There is certainly a really extreme contrast in the policy positions on immigration of Biden and Trump," said Julia Gelatt, a senior policy analyst at the nonpartisan Migration Policy Institute.

The sharp differences — and what's at stake — is historic.

"I don't think we've seen ever before a president put immigration so much at the forefront of his policymaking as President Trump has done," said Gelatt.

The president has continued the trend during the pandemic by dramatically restricting legal immigration. In the president's view, fewer foreign workers means less competition for Americans.

"It would be wrong and unjust for laid-off Americans to be replaced with new immigrant labor flown in," President Trump said in April.

"My immigration policy is built around keeping families together," Biden told NBC News in June.

The former vice president has also committed to pausing deportations for undocumented immigrants already in the country for 100 days.

"In the first 100 days of my administration, no one, no one will be deported at all," Biden said during a CNN debate in march.

Both presidential contenders argue that securing the border is essential. But they disagree on how to go about it.

President Trump wants to continue his long-time campaign promise: building a wall along the southern border paid for by Mexico.

"We're up to 330 miles of wall. We're doing 10 miles a week," President Trump told his supporters at a recent  rally in Ohio.

Most of the new structures his administration has built so far are taller fences replacing barriers that already existed — paid for entirely by the U.S. government.

Biden would stop construction of the border wall, which he calls ineffective and a waste of taxpayers' money. He says he would invest in surveillance technology instead.

Most ambitiously, Biden wants to work with Congress to provide a roadmap to citizenship for around 11 million undocumented immigrants.

He would also fully reinstate DACA protections for hundreds of thousands of undocumented immigrants who came to the U.S. as children.