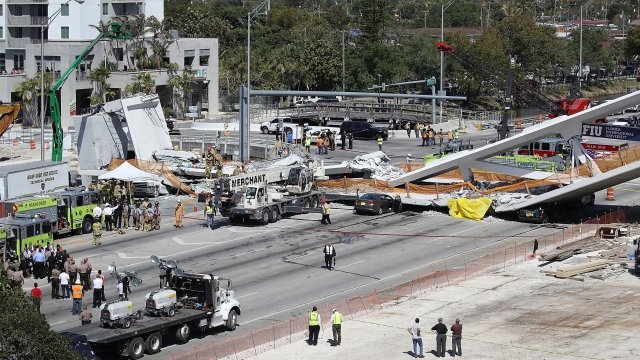 SMS
Companies Behind Collapsed Miami Bridge Have Checkered Safety Records
By James Packard
By James Packard
March 15, 2018
The companies working on a bridge that collapsed at a Florida university Thursday have pasts that raise red flags when it comes to safety.
SHOW TRANSCRIPT

The two construction companies that worked together on the bridge that collapsed near Miami on Thursday have a history of questionable practices and accusations of safety violations.

Munilla Construction Management, which was contracted on the project, was sued just 10 days ago over the collapse of a temporary walkway the company built at Fort Lauderdale airport. The firm is constructing an expansion at the airport. The lawyer for a TSA agent who works there says when her client stepped onto the walkway, it collapsed under his weight, leaving him with several broken bones. The lawyer says the company was warned several times that the walkway had problems.

And the Occupational Safety and Health Administration has cited Munilla for at least seven "serious" safety violations in the last five years. That's as far back as online records go.

The other company involved in the Miami bridge project — FIGG Bridge Group — has a record of its own. At least four workers were injured in 2012 when a portion of a bridge under construction collapsed. The state of Virginia fined the company for the collapse.

As of Thursday evening, at least four people had died because of the Miami bridge collapse. Munilla and FIGG both said they would cooperate with investigators.