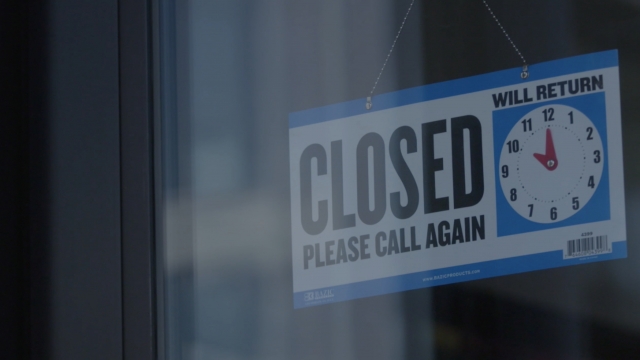 SMS
Community Banks Played Crucial Role In First Round Of PPP Funding
By Mark Fahey
By Mark Fahey
April 24, 2020
Businesses in states with fewer small banks struggled to get Paycheck Protection Program funding before the first round of money ran out.
SHOW TRANSCRIPT

The first round of emergency funding for small businesses ran out after just 14 days. And whether you got a piece of that $342 billion seemed to depend a lot on which state you’re in.

Say you’re in California: For every dollar of eligible payroll there, the Paycheck Protection Program handed out a little less than 40 cents. States like Kansas, North Dakota and Nebraska ended up getting twice as much. That’s led some people to say that politics might have something to do with it. And in fact, red states did receive about 20 cents more for every dollar of payroll compared to blue states, according to a Newsy analysis.

But there is another important difference that is probably a better explanation for why money flowed to these states. That’s the community banking system. Community banks are small, traditional banks that have a close relationship with customers in a specific area.

They've been disappearing for years — their business swallowed up by the big commercial banks like Bank of America, Chase and Wells Fargo. It used to be that about 40% of banking assets resided in community banks. Now, it’s only 12%. But community banks remain strong in rural areas, where they still make up more than 70% of bank offices.

So what’s that mean for the PPP?

Well, the program was rolled out so fast that the biggest banks were reportedly scrambling to work out their liabilities and to verify customer information. Smaller banks pushed applications through based on pre-existing relationships, and they ended up making 60% of the loans while big bank customers were sitting around waiting.

The relationship between community bank offices and PPP funding is much stronger than any other factor we looked at — including politics. This was great news if you were in places like North Dakota, Iowa, Maine and Kansas, where community banks still make up more than 70% of all bank offices. But not if you are in places like Arizona, California or Oregon, which are more dependent on the bigger banks.

The way this all played out was especially hard on Nevada. The state is more at risk than any other, according to a Federal Reserve study. But its community bank system is practically nonexistent — just 27 branches out of hundreds in the state. The state ended up with less PPP money per person than any other.

Bigger banks will likely be more on the ball in the second round of funding, which was signed into law Friday. The new bill earmarks $60 billion for smaller banks, and experts say the money could be gone once again in just 48 hours.