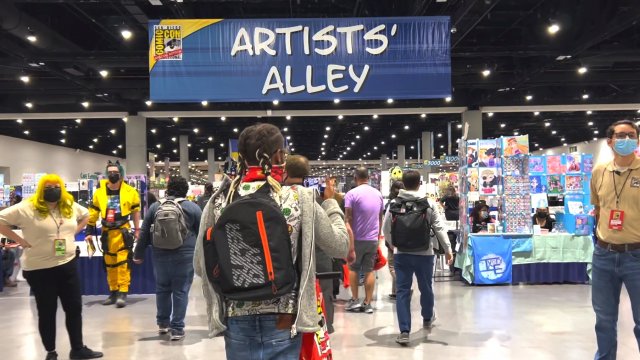 SMS
Comic-Cons Return Without Hollywood Studios
By Casey Mendoza
By Casey Mendoza
December 15, 2021
Studios held virtual events on their own time, and it's unclear if or when studios will return to the conventions.

After two years of canceled events and virtual gatherings, Comic-Cons are returning to venues across the country — but the world's most famous convention saw some pretty big absences in its lineup.

"For two years, we've all been meeting via the computer screen, and now we can do it in person," David Glanzer, Chief Communications Officer for Comic-Con International, said.

An estimated 50,000 people attended San Diego Comic-Con special edition — the first in-person event from Comic-Con International since 2019, with some regulars returning and others attending for the first time.

But some of the biggest corporate voices in pop culture were missing at the convention.

Hall H — once called "the most important room in Hollywood" by the Los Angeles Times — was where Hollywood's biggest studios debuted their most anticipated announcements to an arena of more than 6,000 fans.

But this year, Comic-Con went without Hall H panels, and studios like Disney, Warner Bros. and Netflix were absent from the convention.

In lieu of panels at Comic-Con, studios continued to hold virtual events like "DC Fandome" or "Tudum" on their own time. It's unclear if the companies plan on returning to conventions in the future.

Netflix launched their own website for announcements and trailers, and the company says their "Tudum" livestream garnered over 25 million views.

In response, outlets like the Hollywood Reporter began wondering if Comic-Con was becoming the "Linear TV" of fandom events.

But does that matter to the fans who still gathered in San Diego?

"While it might feel a little bit different, it doesn't really matter because everybody will find something that they love, and then they will come here," Tsaeng said.

For long-time attendees, San Diego Comic-Con minus Hollywood was a welcome return to the years when film and TV franchises didn't dominate the event.

"Comic-Con continually evolves," Glanzer said. "We’re not the same event we were ten years ago."

Walking around the exhibit halls and sitting through the panels, it's easy to forget the absence of Hollywood, and at the end of the day, Comic-Cons aren't for the studios — it's for the fans.