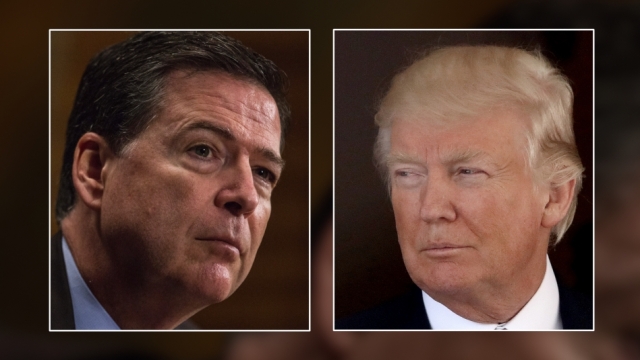 SMS
Comey: Trump Asked How FBI Could 'Lift The Cloud' Of Russia Probe
By Lauren Stephenson
By Lauren Stephenson
June 7, 2017
The Senate Select Committee on Intelligence has published the fired FBI director's statement for the record a day before he is scheduled to testify.
SHOW TRANSCRIPT

Former FBI Director James Comey will testify that President Trump asked him what Comey's team "could do to 'lift the cloud'" of the Russia investigation from his administration.

Comey's statement for the record was published on the Senate intelligence committee's website Wednesday — the day before his scheduled testimony to the committee.

The statement details five conversations Comey had with Trump: one before his inauguration and four after Trump became president.

It appears to confirm multiple New York Times reports that Trump asked Comey to be loyal to him and to end the FBI investigation into fired national security adviser Lt. Gen. Michael Flynn.

Comey states Trump invited him to dinner Jan. 27, and it ended up just being the two of them.

He says Trump asked him if he wanted to keep his job. Comey writes he found that "strange" because Trump had twice previously stated that he hoped Comey would remain in his position, and Comey had "assured him" he planned to do so.

Comey writes: "My instincts told me ... the dinner was, at least in part, an effort to have me ask for my job and create some sort of patronage relationship."

The then-FBI director, whom Trump fired in May, said the dinner made him "uneasy," so he told Trump that he wasn't "'reliable' in the way politicians use that word, but he could always count on [Comey] to tell him the truth." 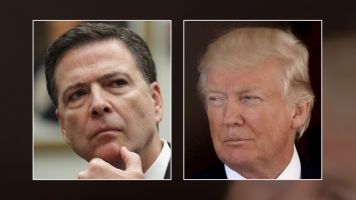 Comey says Trump told him he expected loyalty during the dinner, after which they "simply looked at each other in silence." Comey eventually promised Trump honesty, which Trump apparently took to mean "honest loyalty" — a term Comey admits may have meant different things to the two men.

On Feb. 14, Comey went to the White House for a meeting in the Oval Office with the president and several other officials. Comey writes Trump asked him to stay back at the end of the meeting to speak to him alone. It's during that conversation, Comey states, that Trump brought up Flynn.

Comey says he didn't agree to let go of the investigation. He states he wrote up an unclassified memo "immediately" and made FBI senior leadership aware of it.

Comey states they all agreed "to keep it very closely held" so as not to "infect the investigative team."

He testifies that he asked Attorney General Jeff Sessions to "prevent any future direct communication" between Trump and himself. Sessions "did not reply."

Comey states that Trump called him on March 30 and said "he had nothing to do with Russia, had not been involved with hookers in Russia, and had always assumed he was being recorded when in Russia."

According to the statement, Trump then asked what could be done to "lift the cloud" of the Russia investigation.

Twice after that, Comey states Trump said "he hoped [Comey] could find a way to get out that he wasn't being investigated." 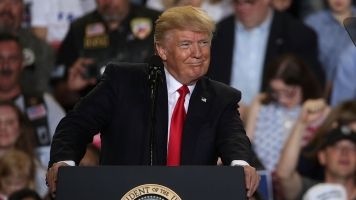 Why Was James Comey Fired? President Trump Contradicts His Team

Comey says he did reassure Trump during a meeting on Jan. 6 that the FBI wasn't investigating Trump personally.

The reassurance came after Comey briefed Trump on the existence of a soon-to-be-published dossier. While the dossier contained information that "was salacious and unverified," the intelligence community felt Trump had a right to know.

The FBI's leadership team was apparently worried the dossier might lead Trump to think he was the target of a counter-intelligence investigation. Comey's reassurance to Trump followed his consultation with the leadership team.

Comey says he told then-acting Attorney General Dana Boente of the March 30 conversation since Sessions had recused himself from the investigation. But he said he didn't hear back from Boente before Trump called him April 11.

The statement says the president asked Comey again to publicly state Trump wasn't under investigation in a phone call on April 11. That was the last time Comey says he spoke with Trump.

President Trump's outside counsel said in a statement: "The President is pleased that Mr. Comey has finally publicly confirmed his private reports that the President was not under investigation in any Russian probe. The President feels completely and totally vindicated. He is eager to continue to move forward with his agenda."