Comey Said Trump Is 'Morally Unfit To Be President' 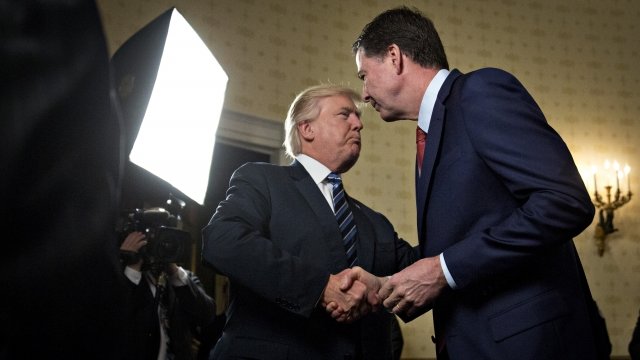 SMS
Comey Said Trump Is 'Morally Unfit To Be President'
By Katherine Biek
By Katherine Biek
April 16, 2018
The former FBI director made the comment during an interview with ABC's George Stephanopoulos that aired Sunday night.
SHOW TRANSCRIPT

Comey made that comment during an interview with ABC's George Stephanopoulos that aired Sunday night.

It was Comey's first major interview since Trump fired him almost a year ago, and it marks the start of his tour to promote his soon-to-be-released memoir, "A Higher Loyalty: Truth, Lies, and Leadership."

In the book, Comey wrote that Trump "is unethical and untethered to truth and institutional values." That passage prompted Stephanopoulos to ask if Trump is "unfit to be president."

"Our president must embody respect and adhere to the values that are at the core of this country. The most important being truth. This president is not able to do that," Comey said.

After passages from Comey's memoir were released earlier this month, the president tweeted that he was "a weak and untruthful slime ball."