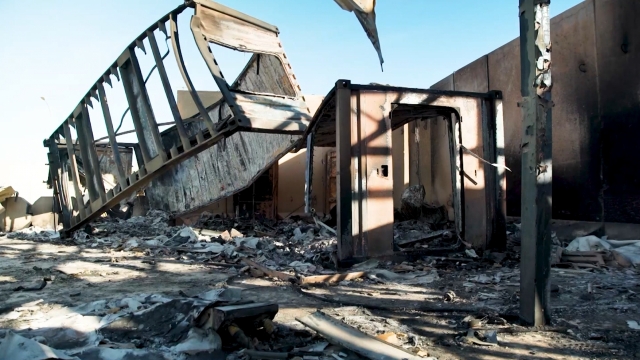 SMS
Brain Injuries From Combat Get New Attention After Missile Attack
By Peter Hecht
By Peter Hecht
January 30, 2020
More than 400,000 service members suffered traumatic brain injuries in Iraq and Afghanistan. Most returned to duty. Many will have enduring symptoms.
SHOW TRANSCRIPT

The initial reports after Iran's Jan. 8 missile strike on the Al Asad Air Base base in Iraq were promising, with President Trump and top military officials saying no U.S. service personnel were killed or injured. But this week, after revising the injury count four times, the Pentagon said more than 60 people suffered traumatic brain injuries as a result of the attack.

While 39  have been returned to active duty, such injuries can result in serious and long-term health and mental health issues.

Traumatic brain injury — or TBI — has been called the "signature injury" of U.S. military involvement in Iraq and Afghanistan. TBI can result from concussive forces of explosions, such as mortars or roadside bombs, as well as direct impact injuries from combat or military-related accidents.

More than 400,000 military TBI cases have been diagnosed since 2000, with 13% considered moderate to severe. In a 2018 National Institutes of Health study of Iraq and Afghanistan veterans, service members reported physical symptoms like dizziness, headaches and back aches, as well as cognitive and psychological issues: memory loss, post-traumatic stress, depression and suicidal thoughts.

Dr. Michael Lipton of the Albert Einstein College of Medicine in New York has treated veterans with TBI and extensively researched the condition among service members.

He said, "Years ago, certainly in earlier military conflicts, traumatic brain injuries were first of all not widely recognized because at the mild end of the spectrum, concussions and symptoms that were relatively transient were not acknowledged as representing a brain injury. They were thought to simply be some other kind of transient psychological phenomenon. At the same time, the likelihood for, particularly in the setting of combat, for an individual to die as a result of an injury — whether it was the brain injury itself or other bodily injuries that occurred at the same time — was much higher. So we're very good nowadays at having people survive even severe traumatic brain injury. And we're also recognizing how broad the spectrum of traumatic brain injury is."

In severe cases, traumatic brain injury can increase long-term risks for disorders including Alzheimer's and Parkinson's, or the degenerative brain disease Chronic Traumatic Encephalopathy. Most cases aren't deemed serious early on: 90% of military members with TBI return to active duty.

One of those was Capt. Lance Royce, a 2004 Purple Heart recipient spotlighted in this U.S. Army video on TBI.

Royce said, "I was disoriented. I had trouble walking at first ... I was determined to have a moderate to severe concussion. After three days, I was released back to my unit and continued the fight."

Royce returned home after two more months of combat. Tests before his next deployment revealed scarring on his brain, requiring long-term follow-up.

“I heard that they had headaches and a couple of other things. But I would say, and I can report, it is not very serious," said the president after being asked about the injuries.

Those remarks didn't sit well with William Schmitz, the national commander for the Veterans of Foreign Wars. He called for an apology from the president for "his misguided remarks."

That's because TBI is regarded with increasing seriousness by the military and veterans groups advocating for its detection and treatment.

Naval Capt. Thomas Johnson is the director at the Intrepid Spirit Concussion Recovery Center at Camp Lejeune. He testified at a 2017 House Armed Services Committee hearing about unnoticed symptoms of traumatic brain injuries and his insistence on medical follow-up.

He said, "Historically, if a service member had a problem, they may or may not go to medical. Now it is an event-driven process. If you are in the proximity of a blast, you are going to go to medical regardless of your symptoms.”