Colorado Police Relocated A 300-Pound Bear Living Under A Deck 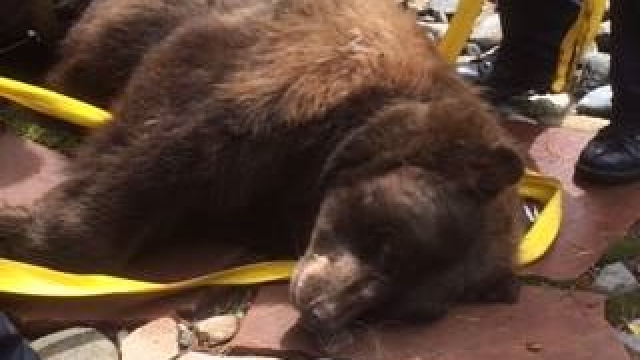 It was a call most police departments probably don't get every day: On Wednesday, a Colorado homeowner asked officers to remove a bear living under his deck.

According to the Town of Breckenridge's website, bear sightings are possible. The site even has a section called "Living with Bears."

Officials ask residents to secure their trash, keep pet food indoors and not leave food inside their cars in an effort to keep black bears from becoming habituated to the area.

That's an increase from around 12,000 bears living in The Centennial State in the early 2000s.

The bear underneath the homeowner's deck weighed 300 pounds and was 10 years old.

That's on the smaller end for an American black bear. National Geographic reports full-size black bears can weigh up to as much as 600 pounds and live on average to be 20 years old.

Black bears are opportunistic eaters and eat vegetation and meat. They also easily develop a taste for human food, which is why it's important to not feed them or make it easy for them to get human food.

Breckenridge police officers assisted Colorado Parks and Wildlife in tranquilizing the animal and checking its health before relocating it to a different part of the state.