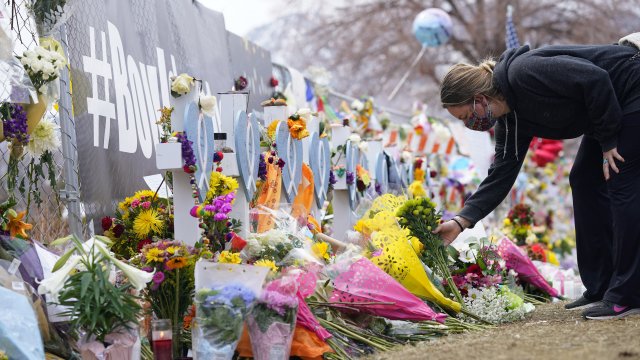 SMS
A Moment of Silence In Boulder, A Gun Debate in DC
By Alex Arger
By Alex Arger
March 28, 2021
Democratic Sen. Chris Murphy says "sky will not fall" politically for GOP if they vote for "reasonable expansion of background checks."
SHOW TRANSCRIPT

10 minutes of silence over the weekend in Boulder...remembering those killed in a mass shooting at a local supermarket.

“This is a way for people to be able to step outside with their neighbors, to participate without being too close to one another, but to share in the acknowledgment of those who have passed,” Mayor Sam Weaver said.

In Colorado, a call to action.

A Denver Post editorial said the estimated 350 million guns in America is too many.

"I don’t think the answer is too many guns, Chuck," Republican Sen. Pat Toomey of Pennsylvania told NBC's "Meet the Press. "If I have four or five guns and I buy two more, did America become a more dangerous place? I don’t think so.”

One approach would be to start with expanding background checks, covering all assaults, not just felonies.

"I think the theory of the case is that once we convince Republicans that the sky doesn't fall for you politically when you support a reasonable expansion of something like background checks, you can move onto other interventions," Democratic Sen. Chris Murphy of Connecticut said.

Chances in the Senate are uncertain, with many on the pro-gun side arguing tougher laws wouldn’t necessarily stop people like the suspect charged in Colorado but *would make it harder for law-abiding citizens to protect themselves.

Back in Colorado, a funeral for Boulder Police Officer Eric Talley is scheduled for Tuesday. His sister talked to CBS News.

“He loved being a police officer," Kirstin Brooks said. "He's like, 'It's not my job that's unsafe Kirsten.' He said it's people. And he said that, you know, it’s not a bad job. He said, there's a lot more good.”