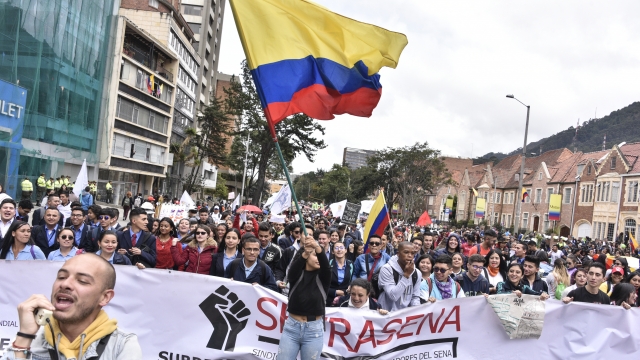 Hundreds of thousands of people are protesting in Colombia, staging the second national strike within two weeks.

The continuing demonstrations, including a national strike on Wednesday, were triggered by proposed tax increases for low-income residents and cuts in health care and pension subsidies. They reflect the rising discontent over economic inequality in several Latin American countries.

The upheaval in Colombia has not turned violent like protests in Chile, where 26 people have been killed and thousands injured since mid-October.

But the Colombian protests were re-energized this week after an 18-year-old protester was killed by a projectile fired by riot police on Sunday.

That prompted President Iván Duque to assemble Colombian mayors in a dual call to maintain "the public order" while respecting rights of "citizen participation."

Duque also met with representatives of a national strike committee, including union and student protest leaders. He restored a tax break for low-income Colombians and rolled back a plan to increase health care contributions for retirees. He also called for a national dialogue to seek "concrete solutions."

He said, "I am convinced that the process of conversation among the citizens will always result in positive things."

Another issue driving Colombian protests is Duque's purported failure to fully implement a peace deal with the leftist guerrilla group Revolutionary Armed Forces of Colombia, or FARC. Former FARC members, now part of a recognized political party, have joined in the protests.