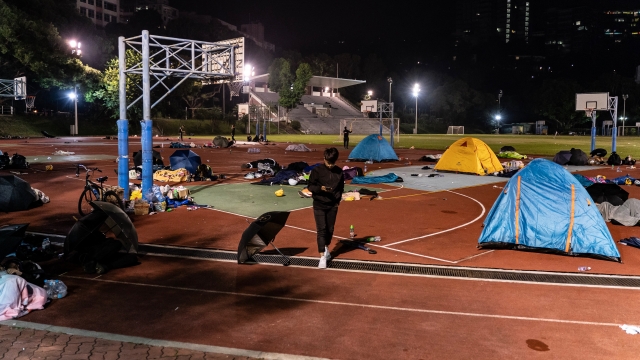 As tension has ramped up in Hong Kong's six-month protest movement, college campuses have become a main hub for protesters.

Demonstrators are preparing for clashes with riot police, and colleges are now the location of heavily fortified camps where some protesters are building and stockpiling weapons. Major universities have shortened semesters or switched classes to online.

Most of the protests in Hong Kong have occurred on weekends. But recently, organizers have extended them into the work week. The Chinese government suspended all K-12 schools through Sunday. The city's subway operator has partially shut down service in response to the chaos.

On Monday, Chinese state media warned protesters they're "on the edge of doom" and that they should "walk away as soon as possible when you can still make the call." It went even further, saying protesters will eventually be "punished by law and mortality."