Cohen Presents Documents To Back Up Testimony About Trump 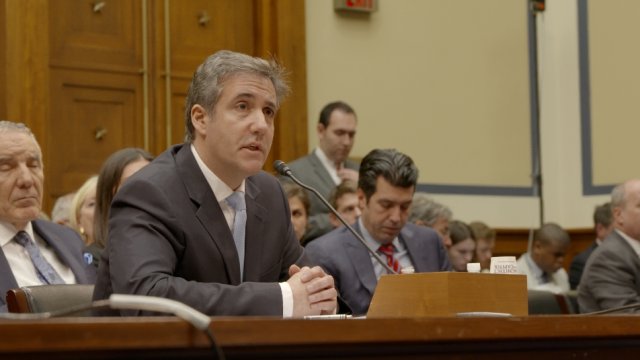 The Michael Cohen hearing delivered on the fireworks and accusations. The president's former personal attorney and fixer leveled some pretty serious claims Wednesday both about President Trump's alleged crimes and his character.

Cohen brought evidence to back up some of his allegations. In his opening statement, Cohen told members of Congress the president not only knew about hush money payments to two women accusing him of affairs ahead of time, but he arranged to have Cohen paid back over time for one of them. He produced a single check signed by the president himself while in office.

"This $35,000 check was one of 11 installments that was paid throughout the year while he was president," Cohen explained.

The president's former lawyer says there are multiple instances of the president lying and inflating his net worth, whether for real estate dealings, to purchase the Buffalo Bills or even his rankings on the Forbes list of richest people. Cohen produced documentation of the assets then-civilian Donald Trump claimed to have. He now says they were largely inaccurate. Cohen also submitted letters he wrote to the various schools then-candidate Trump attended, threatening them not to release his grades or test scores.

Michael Cohen told members of Congress the president committed other crimes, too. He says he can't go into detail because of ongoing SDNY investigations. But his claims against the president's character, namely that he's a racist and a conman, are based on what Cohen said he witnessed and heard — but he has no hard evidence.

While Cohen said he taped the president, he does not have any of those alleged racist statements recorded. Still, Cohen looked to reinforce the idea that the president lies to the American people routinely. He said the president knew about, and even encouraged, business dealings in Moscow during the campaign, something he has consistently denied. Cohen didn't present evidence to back that up.

Only a portion of Cohen's accusations allege potential criminal wrongdoing by the president. But Democrats, who are considering impeachment, may look to corroborate those allegations with evidence or reports from either the special counsel or the Southern District of New York.