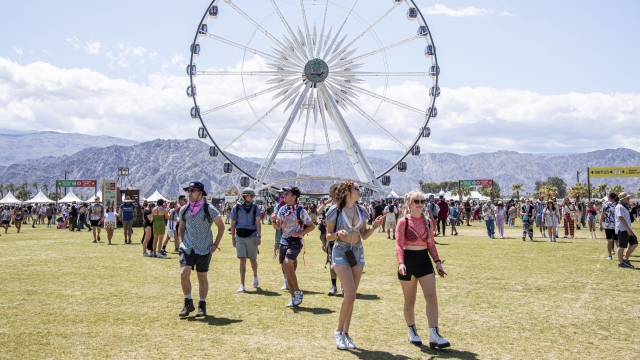 SMS
Coachella Music Festival Returns After 2 Years, COVID Shutdown
By James Packard
By James Packard
April 22, 2022
Its return is a token of our re-emergence from the depths of a pandemic that kept these concert-goers away for three years.
SHOW TRANSCRIPT

After two canceled years, Coachella is back for a second weekend.

It's iconic for its eclectic colors, A-list headliners and desert setting.

Its return is a token of our re-emergence from the depths of a pandemic that kept these concert-goers away for three years.

"It did hurt a lot for a year," Palm Springs Hotel Manager Aftab Dada said. "Absolutely never a doubt that it won't come back."

Now, in nearby Palm Springs, business owners and hoteliers are ecstatic to welcome droves of visitors from all over the globe.

"It's the number one industry in the whole Coachella Valley — Tourism. It employs one in five jobs," Dada continued.

He's been running this hotel for some 30 years.

These days, it's host to a poolside concert.

But for Dada, Coachella is a lot more than a concert.

"[It] really has put the Palm Springs destination on the worldwide map," he said.

But not everyone here sees it as all good.

Alex Kravitz runs a store on the main drag of downtown Palm Springs.

"Right before Coachella, we were having better traffic," he said.

Kravitz actually sees a dip in business during the festival.

"They leave town — even the locals — they leave town because of the traffic, because of, you know, some of them leave because of the sound," he continued. "I do part time [as a] Lyft driver. When people exit the venue, you wait two hours for one, right? And that ride is like around $10 to $15. So, it's not worth it to drive."

Dada knows the cost and says the area has done what it can.

"We have so many beautiful, great restaurants that are so difficult to get reservations over the weekend. And this is the two weekends that you can make a phone call and you can easily get reservations are coming down with us," Dada said.

"Maybe it's good for restaurants, but retail, it's definitely no good," Kravitz said.

But for Dada, the benefit is clear. It's in the numbers.

"Twenty years ago the budget of the city of Palm Springs was $25 million. Now we are projecting that ... this coming fiscal year will start July to June — We might be north of $115 million," he said.