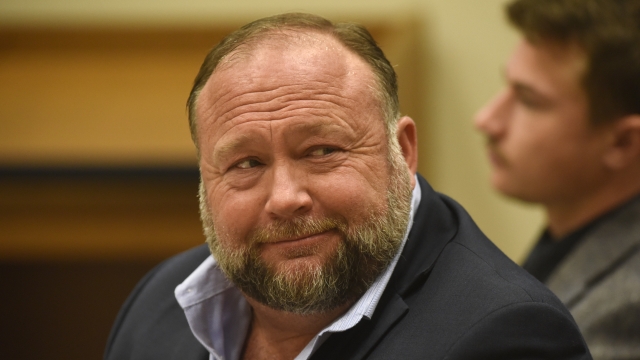 A jury will decide how much money conspiracy theorist Alex Jones must pay to the families of victims after he was already found liable for damages.

A lawyer for families of eight people killed in the 2012 Sandy Hook massacre told a jury Thursday that conspiracy theorist Alex Jones started lying about the shooting the day it happened and provided the machinery that allowed that lie to spread.

Christopher Mattei began presenting closing arguments in a trial to determine how much Jones should pay for persuading his audience about the lie that the 2012 shooting at Sandy Hook Elementary School was a hoax staged to impose more gun control laws.

“The lies that started on December 14, 2012, are continuing to this very day,” Mattei said. “In two months it will be 10 years, 10 years since these families lost their loved ones and even now, even now, he's still doing it.”

The six-person jury could begin deliberations by the day's end in the lawsuit, one of several filed against the conspiracy theorist by relatives of the 26 people killed in the mass shooting.

A jury will decide how much money conspiracy theorist Alex Jones must pay to the families of victims after he was already found liable for damages.

Since the trial began Sept. 13, all 15 plaintiffs in the Connecticut lawsuit have testified about being tormented for a decade by people who believed Jones' claims that the shooting never happened, and that the parents of the 20 slain children were “crisis actors.”

The plaintiffs said they have received death and rape threats, mail from conspiracy theorists that included photos of dead children, and had in-person confrontations with hoax believers. They sued Jones for defamation, intentional infliction of emotional distress and violating Connecticut’s unfair trade practices law by profiting off the hoax lies.

The people suing Jones and his company, Free Speech Systems, in the Connecticut case include the relatives of eight massacre victims, as well as an FBI agent who responded to the school.

Mark Barden, whose son Daniel was among the 26 victims, told the jury conspiracy theorists threatened to dig up the boy's grave to prove the shooting never happened.

“This is so sacrosanct and hallowed a place for my family and to hear that people were desecrating it and urinating on it and threatening to dig it up, I don’t know how to articulate to you what that feels like,” Barden told the jury. “But that’s where we are.”

The shooting was portrayed on Jones' Infowars show as a hoax involving actors aimed at increasing gun control.

Jones, whose show and Infowars brand is based in Austin, Texas, was found liable for defaming the plaintiffs last year. In an unusual ruling, Judge Barbara Bellis found Jones had forfeited his right to a trial as a consequence of repeated violations of court orders and failures to turn over documents to the plaintiffs' lawyers.

Jones took the stand for a contentious day of testimony, saying he was “done saying I'm sorry” for calling the school shooting a hoax.

Outside the courthouse and on his web show, he has repeatedly bashed the trial as a “kangaroo court” and an effort to put him out of business. He has cited free speech rights, but he and his lawyer were not allowed to make that argument during the trial because he already had been found liable.

Jones' lawyer, Norm Pattis, has been trying to limit any damages awarded to the victims' families and claimed the relatives were exaggerating their claims of being harmed.

In a similar trial in Texas in August, a jury ordered Jones to pay nearly $50 million in damages to the parents of one of the children killed in the shooting, because of the hoax lies. A third such trial, also in Texas, involving two other parents is expected to begin near the end of the year.

Jones has said he expects the cases to be tied up in appeals for the next two years and has asked his audience to help him raise $500,000 to pay for his legal expenses. Free Speech Systems, meanwhile, is seeking bankruptcy protection.