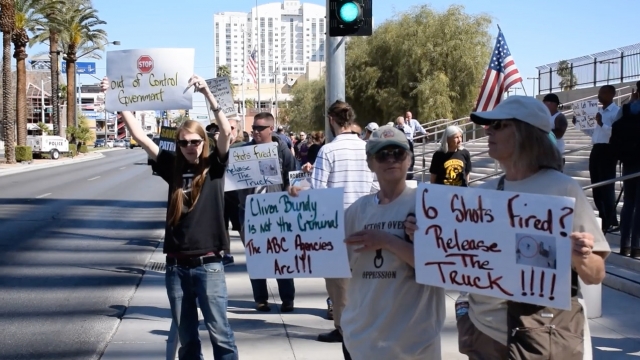 Cliven Bundy was in federal court Thursday in Las Vegas, and his allies gathered outside to show their support.

Bundy's in trouble for his 2014 standoff with the Bureau of Land Management. The federal agents were trying to round up Bundy's cattle for grazing on federal land without paying the required fees. Bundy and his supporters said the BLM overstepped its bounds.

"I mean, it's kind of why we're here in the first place because the federal government is saying this is ours," one protester said during a debate with a Las Vegas police officer.

Bundy faces 16 charges, including extortion, conspiracy and assault on a federal officer. He refused to enter a plea, so the judge entered a not-guilty plea on all charges.

Newsy's partners at KTNV report the dozens of protesters have been peaceful.

The video includes clips from Stringr and images from Getty Images and the Multnomah County Sheriff's Office.