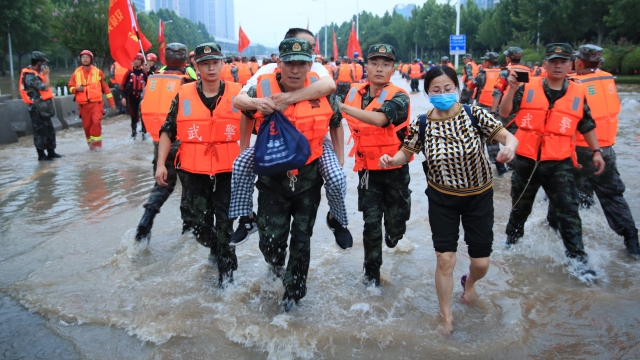 SMS
Climate Change Seen From Floods To Fires
By Newsy Staff
By Newsy Staff
July 22, 2021
Record-breaking rains flood parts of China and India. In one city, 24 inches of rain fell in 24 hours. In the U.S., drought and wildfires rage.
SHOW TRANSCRIPT

The central Chinese city of Zhengzhou was flooded-out by a record-shattering amount of rainfall on Wednesday.

Rescue crews worked frantically to save motorists from the flooded streets.

The floodwaters submerged a school.  Children were floated out of the school in plastic bins.

The city's underground subway system was overrun with water.   The flood waters were waist-deep in some areas.  Commuters who were stuck in the flooded subway trains stood on seats to save themselves.  A dozen people drowned.

Several days of rain in the region caused a massive mudslide near Mumbai.  At least 31 people were killed in the mudslide.

In the western United States, an unrelenting drought has caused significant wildfire risks.

Large wildfires destroyed houses as they spread.  "I really don't know what else to say about this, we've lost everything."

The 79 active wildfires in the country have burnt nearly 1.5 million acres.

Oregon's Bootleg fire is now the third largest in the state's history.

Thousands of firefighters and emergency personnel work around the clock to fight the blazes.  A change in the weather pattern helped to calm the winds which gave fire crews the chance to control the fires.

California power company, Pacific Gas and Electric, announced it will bury 10,000 miles of its electric lines.  It will cost the company up to $30 billion to complete the project.   PG&E made the announcement after admitting its equipment may have ignited one of the large fires.