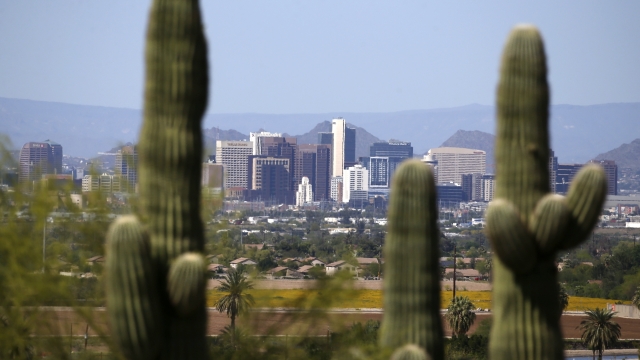 SMS
Climate Change Is Threatening The Saguaro Cactus' Survival
By Adi Guajardo
By Adi Guajardo
May 19, 2022
Saguaro cactus reproduction has hit a wall in the last decade, with stress preventing the plants from surviving into adulthood.

The iconic saguaro cactus looms across parts of Arizona.

The prickly mysterious giant grows in the desolate Sonoran desert covering southern Arizona and northern Mexico, but it might be in jeopardy.

Daniel Winkler, research ecologist with the United States Geological Survey, says he's concerned about the landscape’s future — a picture he fears will have fewer saguaros.

The National Weather Service recorded 2020 as the driest year in Tucson. That same year, August took the title as the warmest month on record at 92 degrees, and it’s expected to be hotter than normal this year.

"Saguaros have evolved to deal with typical desert conditions or days over 100 degrees or more," Winkler said. "What we don't really understand is whether they can tolerate an abundance of 100 degree days as we're seeing."

Winkler says the severe long-term drought much of the southwest has been experiencing over the last couple of decades has also negatively impacted the saguaro population, especially in the national park.

"What we're seeing is that the number of young, new individuals that are in the population is dramatically decreasing from historic levels," Winkler said.

The 2020 saguaro census found between 1990 and 2020 the number of saguaros at the national park nearly doubled to 2 million, but in 2010 the species began to hit a wall, and numbers only slightly increased.

Weather is just one component endangering the cactus species

"As buffalo grass spreads across our national park, what we're seeing is an increased prevalence of wildfire," Winkler said.

In 2020, the Bighorn fire in Arizona charred nearly 120,00 acres and destroyed hundreds of saguaro cactuses.

"We know of at least 200 or more other species of plants and animals that entirely depend on the existence of saguaro for their own survival," Winkler said.

As it gets hotter and drier, fear is growing for the beloved staple across metro Phoenix.

A couple of years ago, Scott Bartelt says he began to notice the saguaros in his neighborhood were decaying and dying.

"I think that it’s bacteria, a necrosis, and you can see it just eats away at the plant," Bartelt said.

Bartelt snapped pictures of more than 200 saguaros, documenting his findings on the iNaturalist app for the first metro-Phoenix saguaro census, launched this month by the Desert Botanical Garden.

Hundreds of volunteers signed up to assess saguaros.

Tania Hernandez, a research scientist with the Desert Botanical Garden, says everything points to climate change, but she suspects disease and human pollution in the city may also play a role.

"We don’t understand if it’s a natural process or not," Hernandez said.

She hopes the census can help find answers before it’s too late, as they plan to make it an annual event every May.

Winkler says scientists like himself are conducting research and conservation efforts to help preserve the prickly giant for future generations.

The next saguaro census will be held in 2030, giving scientists a better idea if the iconic giant will survive the Arizona heat and potential fire threats.