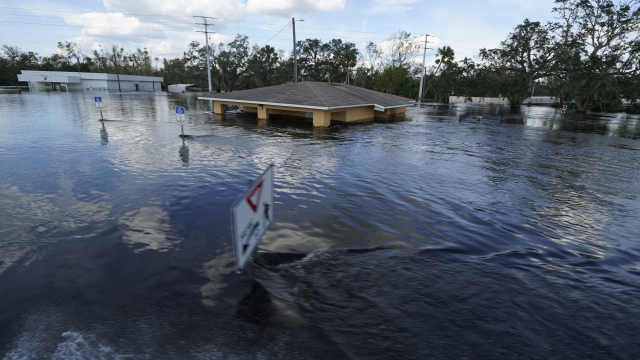 With more climate extremes on the horizon, how much will the issue of climate change affect votes in upcoming elections?

But with midterm elections about a month away, there are signs more voters are noticing, too.

A recent Pew Research Center poll found 77% of adults who have personally been affected by extreme weather events say climate change is a crisis or major problem.

"Climate change is no longer a distant threat. It's moved firmly into our present," said Susan Joy Hassol with Climate Communication. "Most people support climate action. They want their political leaders to do something about it."

In Florida, where Hurricane Ian pulverized cities and left behind a major death toll, Democrat Charlie Crist is making climate change a big part of his run for governor.

"These storms are going to come, but we also need to address climate change, for crying out loud," Crist told MSNBC. "They're getting bigger. They're getting stronger."

"We're not doing any left-wing stuff," he said.

According to a Pew poll, While 71% of Democrats believe the established scientific consensus that humans contribute to climate change, only 17% of Republicans agree.

Even Florida Republicans who worry about a warming world may be hard to convince at the midterm ballot box.

"Climate change is very important.  It could take over. What you’ve seen happen here, it could happen more and more every day," Naples, Florida, resident Denise McPhillips said. "I think we have the best governor anyone could ever have. Gov. DeSantis has done more for this state and I'm very pleased with him, so I would never change my vote."

Despite the partisan gap when it comes to climate change, there are areas where voters seem to agree.

"People across the parties, for example, support some of the things in the Inflation Reduction Act ... tax rebates for putting solar panels on your house, or buying an electric car or getting an electric heat pump," Hassol said. "These things are supported by people across party lines, and younger Republicans are much more concerned than their older peers."

Most polls show that right now, issues like inflation, immigration and reproductive rights are more important to voters. The question is: With more climate extremes on the horizon, how much will the issue of climate change affect any votes?