Ukrainian Citizens Protecting Themselves As Tensions Build With Russia 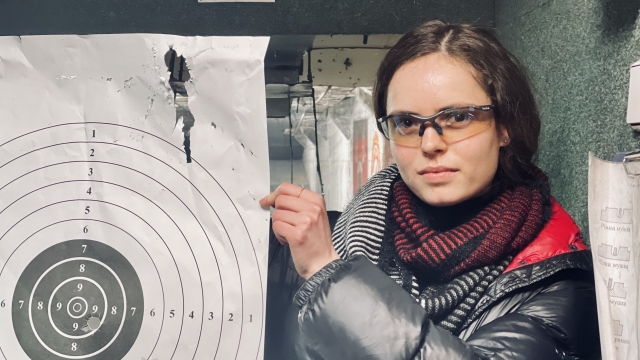 SMS
Ukrainian Citizens Protecting Themselves As Tensions Build With Russia
By Jason Bellini
By Jason Bellini
February 21, 2022
Newsy spoke with a few Ukrainians who are buying their first gun in order to protect themselves, their families and their country.

Twenty-year-old law student Maria Skoropad is getting her first gun for her and her family. She's also training to fire it.

"We decided that we have to learn how to use the weapons before buying it because we don't want to harm ourselves," she said.

One young person after the next is rotating through for training at a gun store and shooting range in Lviv.

"We understand that we have to take care of ourselves," Skoropad continued. "And if somebody will come to our homes ... We have to know how to rescue our families ourselves."

NEWSY'S JASON BELLINI: How nervous are you right now?

"I understand that we have a real good army," Skoropad said. "Other states are giving us some weapons. And we will do anything to rescue Ukraine."

Skoropad's mother tells Newsy they went to Lviv at the urging of relatives in the U.S. who live in Iowa.

"They wanted us to come to the USA, but we decided that we have to be with Ukraine today," Skoropad said. "They're very worried. So that is why we are buying guns."

Some of them were left behind in former Soviet Union-era arsenals, now reconditioned to be used by citizens who say they would take up arms against Russian troops.

"We even have whole groups from private companies that want to teach the staff," he said.

Oksana Petrukh, a 30-year-old who works in technology, is also buying her first gun.

"We are getting ready to meet Russian friends," she said. "I hope for a better solution to the situation, but we have to get ready for the worst case ... Ukraine is now in such a situation that we have to be ready for any kind of situation."

That echoes the message of Lviv's mayor, Andriy Sadovyi, who talked to Newsy about the Russian list that U.S. intelligence says targets individual Ukranians for assassination or detention.

ANDRIY SADOVYI: What are we supposed to do? Stay and wait for them? We won't let them kill us.

NEWSY'S JASON BELLINI: Do you think you're on the list?

BELLINI: You think yes, why?

SADOVYI: My position is very strong. It is my city. It is my country. Ukraine is an independent country. But I am ready to fight ... My family, my colleague, my citizens.

BELLINI: Are you worried? Are you scared?

SADOVYI: Yes.  Everyone is worried about that. If you're going to the shooting club and shoot for two hours, you feel more confident, and you have less fear.

Although Lviv appears to be carrying on as normal, more and more citizens are prepared to take protection into their own hands and resist.