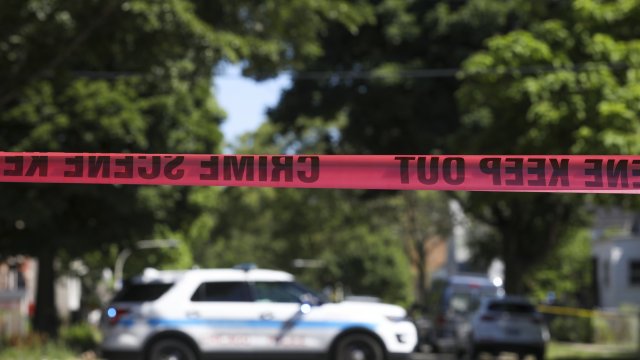 SMS
Cities Search For Answers In The Midst Of Nationwide Spike In Violence
By Jamal Andress
By Jamal Andress
June 22, 2021
Cities like New York and Oakland, California that saw drops in violence over the last decade saw much of that work vanish in 2020 and 2021.
SHOW TRANSCRIPT

Despite nationwide lockdowns, cities across the country saw homicides skyrocket in 2020 — a 55% jump in Chicago, a 36% jump in LA, and a nearly 45% rise in New York City.

Now, at the midway point of 2021, things have only gotten worse.

JAMAL: "Are you worried about the rest of the summer?"

SALAAM: "Well, yes, I am. I think, I think the direction in which the violence is moving in now, I'm definitely concerned."

June 15th was the deadliest day of the year in Chicago so far with 8 murders in less than 24 hours — four of which came in one shooting incident. Compared to 2019, shootings and murders are up 56% and 29%, respectively.

SALAAM: "Well during COVID, we lost about three participants. I believe, I think the last time we lost someone, it's been just four months."

This spike in violence is nationwide and has impacted cities that had made significant progress in combating gun violence.

Cities like New York and Oakland, California that saw significant drops in violence over the last decade saw much of that work vanish in 2020 and 2021 as shootings have soared.

In Oakland, 15 people were killed in the month of January alone. Over the weekend, 6 people were shot and 1 person was killed at a Juneteenth gathering.

While criminologists have lots of theories for why violence has picked up so significantly, ranging from the pandemic to policing to a massive increase in gun sales, no one has been able to pinpoint with any certainty a cause for the spike.

DREIER: "So one of the greatest predictors of violence in the future is exposure to violence."

Oakland saw a 50% reduction in shootings over a seven year period before the pandemic. Local police largely credited their partnership with these organizations for that drop in violence.

DREIER: "These are the sorts of programming that actually transforms communities, because of the nature, the cyclical nature of violence, you can tap into that network, identify those who were at high risk, provide wraparound care, and continue to monitor them in the long term. You see incredible transformation."

Tony Salaam in Chicago says despite their best efforts they lost touch with some of their participants when the pandemic hit.

SALAAM: "Outreach workers will go out, show them how to work the smartphone, get on Zoom and use the tablets. So that increased our numbers again but there was definitely a drop off. Absolutely."

President Biden's infrastructure plan features $5 billion worth of funding for these programs nationwide over an 8-year period. The president is planning to detail his administration's crime prevention strategy Wednesday.