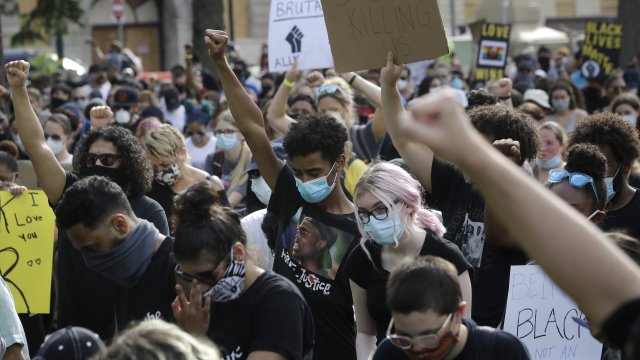 Lauren Taughinbaugh lined up for a free coronavirus test two weeks after she joined thousands of people marching for equality near the White House.

“There wasn’t much social distancing happening, so I wanted to get tested,” she said. “I’m probably going to go back to work soon, and I work in the restaurant industry, so I just wanted to be safe.”

Now, after the peak of unrest and beyond the incubation period for the virus, Washington has not seen a climb in positive cases tied to demonstrations.

“We're really glad that we haven't seen any noticeable spikes from the protests,” said Patrick Ashley, senior deputy director at the city’s health department. “We think that's because people have been using their masks, practicing proper social distancing and washing their hands.”

Washington is not the only place that has yet to see a climb in virus cases after the protests.

In Minnesota, George Floyd’s home state, of more than 13,000 demonstrators tested for coronavirus in recent days, only about 1% were positive, a lower rate than for all tests in the state.

“We’re getting a sense that because the activities were outdoors, which allowed for dispersion of the droplets, that because many protesters were wearing masks, there was a protective effect,” said Dr. Anne Monroe, an associate professor of epidemiology at The George Washington University.

People staying away from the action might also have been a factor.

But not all cities are tracking infections among those who have attended mass gatherings.

Also muddying the picture: Protests began at the same time cities were reopening and just after families and friends broke quarantine bubbles for the Memorial Day weekend.

“Many, many people coming together, it’s hard to believe there wouldn’t be an increase in transmission,” Monroe said. “I’m interested to see how the data looks over the next few weeks and next few months."

Protesters like Taughinbaugh skewed young, making them more likely to feel symptoms and less likely to get tested and show up in data.

Taughinbaugh, now waiting results of her test, said she feels fine and plans to keep protesting.

“It’s a long road. Got to keep fighting,” she said.

It’s a fight that may not be as risky as initially feared.