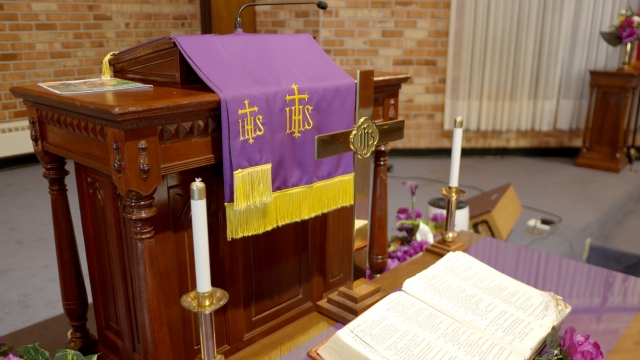 Some churches are still weighing whether to open their doors for in-person worship. Others have already moved forward.

Things are busy at this food pantry outside Providence United Church of Christ in Virginia Beach, but for a year now, the inside has been mostly quiet as church leadership worked to adjust to the threat of COVID-19.

“Different air purifiers and cleaning machines to make sure that the sanctuary and the building are fogged and cleaned both before and after services. But we still haven't decided that we were going to come all the way back, just because the risk is too great,” said Rev. Dr. A. Jerome Danage Sr.

Across the street at Bethany Baptist Church, Pastor H. Patrick Cason says he considered the risk to the predominantly Black congregation and moved the services online indefinitely a year ago.

“I was like, let's follow the experts in this, and our parishioners adhered to that,”  Cason told Newsy.

Now, after years of being neighbors, the two pastors have crossed the street, connected and figured out ways like this to work together to serve the community despite limited activity inside their church buildings.

For example, this field will transform into an outdoor joint service between the two churches. Like many churches, they’ve found an innovative way to keep services going through the pandemic.

They also implemented drive-thru worship services, daily check-ins and a socially distanced food bank. They say they have no choice because, like many institutions, there’s a battle between the risk of COVID-19 and the mental toll of separation.

“Many of our members lack touch in their personal lives. And they may be widowers, or they may be divorced, or their children may have moved away. And so the church is the lifeblood,” said Danage.

Across the country in Memphis, Tennessee, Bishop Vincent Mathews faced a similar dilemma.

“Every third teenager that I talked to, either through my children or through the church, were having suicidal thoughts,” recalled Mathews.

The Church of God in Christ is one of the nation's largest predominantly Black denominations. And despite early pandemic deaths of dozens of church leaders, Mathews says the group decided to restart in-person services in July of 2020.

“We were social-distanced, we were taking temperatures and providing masks and all the PPE. Some people almost came in hazmat suits in our first Sundays. But the bottom line was, I'm actually around people,” said Mathews.

Josh Dickson with the White House Office of Faith-Based and Neighborhood Partnerships tells Newsy faith institutions are a key part of the COVID-19 fight, whether it be hosting vaccine clinics or following CDC guidance on safe gatherings.

The pastor here at Bethany Baptist has hosted vaccination clinics and even taken the vaccine himself but says the decision to reopen the doors for in-person worship for this 500-plus-person church will just take time.