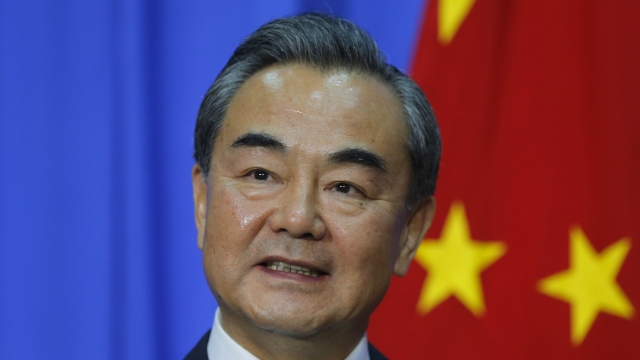 SMS
China Says Russia Has 'Legitimate Security Concerns'
By Newsy Staff
By Newsy Staff
January 28, 2022
The comments come one week before China looks to take over the world stage with the 2022 winter Olympics in Beijing.

Russia is receiving support for its actions in Ukraine from a familiar and powerful voice: China.

In a call to U.S. officials, Chinese foreign minister Wang Yi said that Russia does have "legitimate security concerns" that growing tensions in Europe over Ukraine should be "taken seriously".

The comments come one week before China looks to take over the world stage with the 2022 winter Olympics in Beijing.

Brett Bruen, the president of the global situation room and former director of global engagement for the White House, joins Newsy to talk more about this.

Newsy's Alex Livingston: So, why is China paying such close attention to this? Why are they interested? and what happens ultimately with Ukraine?

Brett Bruen: Well, in the immediate term, they don't want anything, particularly a war, to disrupt their well laid plans for Beijing 2022.

So, I think you will see, and we've already heard indications that Putin is going to hold off for the duration of the games, and if you will, that's a favor that he's extending to China, but at the same time China obviously has, if you will, a tense but sometimes strategic relationship with Russia, sometimes they align. They're certainly aligned on wanting to see the United States and the West damaged and divided.

Newsy's Dave Briggs: There's history here though, right? with the Olympics, China and Russia, specifically related to an invasion?

Bruen: There is, and look, I think, you know, Russia obviously is cognizant that any disruption to the Olympics would obviously be costly not only for them. I remember just after the Sochi games Vladimir Putin chose to invade Crimea and later Luhansk in Eastern Ukraine, and that really squandered a lot of the goodwill that Russia had generated during those winter Olympics. I think you know that is a lesson, if you will, for other countries and it can have consequences including for a country that's not involved in an invasion.

Livingston: So, you mentioned that China and Russia they kind of have a scratch your back, I'll scratch yours kind of relationship. How likely is it though for China to speak out against Russian invasion of Ukraine?

Bruen: You know, it's interesting because China has this policy of noninterference. That is a cornerstone of China's foreign policy, and so invading another country would seem to go against that policy, and yet at the same time as I mentioned there are certain geopolitical objectives that China would see in Russia helping to destabilize Europe. And at the same time there's a little bit of latitude that Xi is willing to extend to Putin because their interests do align in a number of areas. So, at this point I think what you will see out of Beijing is strategic silence.

Briggs: But how much is Taiwan in play here? Is China watching how the US responds and waiting for presumably a green light on themselves invading Taiwan?

Bruen: It's a really good point because Taiwan is, if you will, under U.S. protection. We have guaranteed that we will come to their defense, and yet at the same time Taiwan is looking at what happened in Afghanistan, they're looking at what could happen in Ukraine and saying 'how safe are we?' And China has been menacing, they've been increasing the number of military flights off of Taiwan, and I think there is, if you will, an increasing robust and somewhat aggressive rhetoric towards Taiwan. This would be for Xi Jinping the ultimate goal to be able to reunite one China, and so it is a major concern and obviously China has long planned for this and Ukraine's invasion would set a precedent that could be repeated across Taiwan.

Briggs: Russia created the subtext for a war here. What does a diplomatic end to this look like and do you think we'll get one?

Bruen: Well, I think it is unlikely that we will see a full-scale Russian invasion of Ukraine. What we are more likely to see are incursions, were more likely to see incidents that Russia uses as a pretext to take pieces of land. And look,it is in Moscow's interest to drag this thing out.

So, rather than a full-scale invasion at one point, we will likely see, and I saw when I was at the White House, how Russia slowly steadily invaded other parts of Eastern Ukraine. That is Putin's modus operandi, he likes as a former KGB officer to operate in the shadows to operate not as publicly, not as aggressively as if you will, you know, traditional invasion might look and so, I think Russia's ultimate goal here is to dominate the headlines and is to keep the West divided and destabilized.

Briggs: And how likely is it that the president who make sure there's a camera around when he rides horse shirtless is going to just turn his tanks around without gaining anything?

Bruen: Well, he's going to need something to be able to say, 'look, I have achieved these compromises.' That is part of the reason why he wanted that written statement from Washington on his points, and it seems as though the Americans are willing to play ball here in that they are open to some compromises, including obviously as you mentioned in your report, allowing Nord Stream to go forward. And that is something very important for the Kremlin.