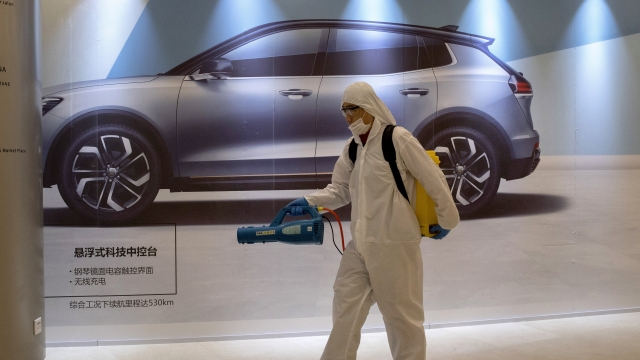 China's struggle to contain the coronavirus has had consequences for the global automotive industry.

China's struggle with the coronavirus outbreak is starting to cause worldwide trouble for the auto industry.

Assembly plants in South Korea, Japan and Serbia have all been forced to halt or slow down work to deal with a shortage of parts — and manufacturers have warned further disruptions could lead to more idled plants outside of China, leading to fewer cars on the market.

That's because most of the industry relies on just-in-time supply chains, importing a steady stream of enough parts at a time to keep the assembly lines running smoothly.

But those supply chains have been upended by China's efforts to contain the spread of the coronavirus, which has caused more than 2,000 deaths in the country. Lockdown measures have kept businesses and factories in affected areas from operating as normal for weeks.

The virus first originated in the province of Hubei, a hub of automotive manufacturing in China. Hubei is home to one of the country's three main state-backed automakers, the Dongfeng Motor Corporation, which has partnerships with foreign companies like Nissan and Honda.

China does send a lot of car parts to the U.S. — about $15.6 billion dollars worth last year, according to the U.S. Department of Commerce. But those imports are just about a tenth of the $155.8 billion total parts imported that year, overshadowed by the $60.8 billion worth of parts imported from Mexico.

No U.S. manufacturers have announced plans to slow production so far, but union representatives in two General Motors plants have warned their factories might run out of reserve parts in the near future, which could force the plant to suspend operations.

The severity of the shortages depends on how fast China's factories can get back to work — which might take a while longer. Authorities in Hubei have said that non-essential businesses will continue to be shuttered through March at least.

Anna Ashton, the Senior Director of Government Affairs at the U.S.-China Business Council, told Newsy, "We don't know what the future holds. But we do know that China is working very hard to try to get people back to work and to restore some normalcy when it comes to balancing both public health and public welfare in terms of people being able to make a living."