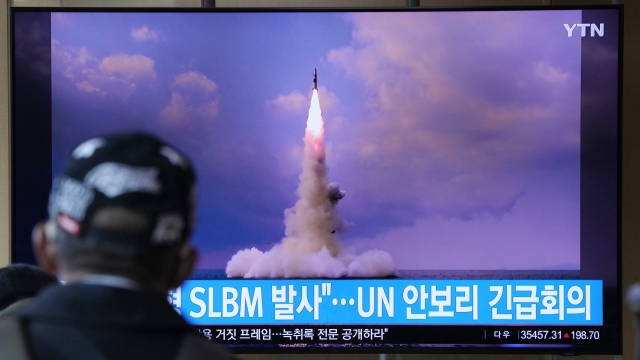 The Biden administration will have to decide whether to ignore the development, build missile defenses to counter attacks, or negotiate.

New weapons capabilities from two adversaries in Asia and they're meant to evade U.S. missile defenses.

"Their older submarine launch missiles can go much further," nuclear policy program senior fellow Ankit Panda said. "What this one does is it potentially makes missile defense a lot more difficult because this missile is going to fly low. It's going to spend most of its time in the Earth's atmosphere, unlike their previous missiles ... It's going to do pull up maneuvers and all kinds of things that will make defending more difficult."

Weapons experts say the missile appears to have first been tested on land in 2019 – before Tuesday's launch on a submarine. The display suggests they're diversifying their at-sea arsenal, while breaching international law.

But as Pyongyang boasts, Beijing is downplaying its own test: China reportedly launched a nuclear-capable hypersonic missile through low-orbit space in August.

"Existing ballistic missiles come over the North Pole," senior research associate Joshua Pollack said. "But an orbiter can come from any direction, including over the South Pole. The reason that matters is because the major element of American missile defense faces the Arctic and the Pacific. It's based in Alaska, primarily. So if you don't want to contend with missile defenses in Alaska, just go the other way. That's the point."

China's Foreign Ministry spokesperson denied testing a missile, calling it "a routine test of spacecraft" to check its reusability. According to the State Department, as of September, China has launched at least 250 ballistic missiles this year alone.

Beijing is also building a new generation of ballistic missile submarines – as is Washington. Now, the Biden administration will have to decide whether to ignore the development, build missile defenses to counter attacks from any direction, or negotiate.